Ever since meeting my husband, Adam, the holiday of Thanksgiving has taken on a different meaning for me.

There’s the obvious mushy gushy reason, that he is one of the best things to ever come into my life, and I am very thankful for him but also for the less obvious reason that he takes this holiday very seriously.

You see, growing up in my Russian Northeast Philadelphia family, I wasn’t really exposed to the “traditional American Thanksgiving” the way I saw it on TV. Sure, we had a turkey, but it was almost always accompanied by pickled herring, sushi (Russians adore their sushi), Olivier salad, napoleon cake and vodka shots. If the season finale of Golas, Russia’s version of The Voice, was on at the same time as the Macy’s Thanksgiving Day parade, guess which one we watched?

Don’t get me wrong, this was a special and cherished time I looked forward to ever year. It was a time to catch up with cousins, try to explain to your older relatives for the eighth time what you were studying in college and answering seemingly endless questions about your dating life. Where we gathered for the Thanksgiving festivities all depended on who was playing host. If my parents hosted, it would be at our home. If my aunt and uncle hosted, it would be in some fabulous Russian restaurant like Emperor, Melody or Lanjeron, whose décor hadn’t left the 1980’s. If this was the case, the turkey, Olivier salad, pickled herring, napoleon cake and vodka shots would all be worked off by dancing. Lots AND lots of dancing.

While many of our neighbors had long finished their Thanksgiving meals and were nursing their food comas, already on their phones perusing the Black Friday bargains or just sound asleep, we were just getting the party started.

So then, it came as a delightful and amusing surprise when I found out that my husband is a Thanksgivoholic.  The turkey must be impeccably seasoned, the stuffing perfectly fluffy and the sweatpants must have the maximum amount of stretch. Oh, and the football. Lots AND lots of football. In fact, Thanksgiving is his Superbowl of holidays.

What makes this so comically ironic is, though Adam is the American poster child for Butterball Turkey, he and his family are Israeli. Though he was born in the United States, his parents came over from Israel in the ‘80s. My mother-in-law is a superb cook, but green bean casserole isn’t exactly in her arsenal. Therefore, when game day finally arrives, it is all the more reason for Coach Adam to make sure he’s sending out only his MVPs. As much as the assistant coach mom-in-law wants to send in the couscous, it unfortunately ends up getting benched every year.

So, whether you will be dancing it out to Jennifer Lopez circa 1999 while navigating awkward political conversations at the table with your Uncle Vadim, playing a competitive game of Pilgrim Pong at your Friendsgiving or meeting your significant other’s family for the first time, don’t lose sight of what this holiday is all about: Spending time with loved ones, enjoying each other’s company, celebrating traditions, making new memories and wearing the perfect pair of elasticized pants. Happy Thanksgiving!

Ilana M. Fish was born and raised in the Philadelphia area and currently resides in Manhattan with her husband, Adam. When not writing, you can find her exploring museums, going on architectural walking tours or pursuing the ever-elusive perfectly coated everything bagel with lox and scallion cream cheese. 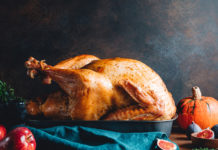 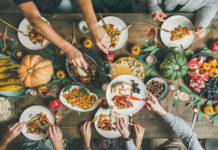 Ask Miriam | How to Deal With Allergies at Thanksgiving