Last Thanksgiving, during a visit back to Austin, Texas, where my family lives, my mother excitedly presented me with her latest acquisition.

It was a mahjong set, and she informed me I would be spending that week home learning how to play the game of our ancestors.

It was not a task I was looking forward to. I’m not thrilled in general at the prospect of learning the rules to a new game, and mahjong — as I remembered from long-ago attempts to learn — was confusing.

But I ended up enjoying it, and made my family play with me every night for the rest of my visit. It’s a fast-paced game with just the right ratio of strategy and luck.

Yes, it turns out that I am well on my way to becoming a bubbe.

Despite my newfound love of the game, I didn’t play mahjong again until earlier this month. On Nov. 5, Tribe 12 held Mahjong 101, an event for women and nonbinary folks to learn to play “the game of our grandmothers.” When I asked the other women at my table why they had decided to come, the answer was unanimous: They, too, wanted to get a head start on bubbe-dom.

So, over a dinner that included boxed wine and pizza (the millennial version, I am sure, of whatever spreads our foremothers went with), we began to play.

The room was divided into two games, each with a seasoned player who showed the newbies how mahjong’s done. My table’s teacher was a 22-year-old dietetic intern named Rachel Cohen. She couldn’t quite recall the first time she had played, but estimated that she’d been playing since she was about 8. For everyone else, this was essentially their first time playing.

Cohen said she mostly plays mahjong with her family. She has sometimes played with women from her family’s synagogue as well and always with women who are older than her. It was nice to experience the game with people closer to her in age, she said.

“I’ve always been fascinated by puzzles and things of that sort,” Cohen said. “I’ve always enjoyed it as a pastime. My grandma taught my mom, and then I joined in pretty soon after, so it’s also a connection to my grandma since she’s so passionate about it.”

My grandma also played mahjong, and my earliest mahjong-related memory was of her winning money at a JCC tournament. Despite its Chinese origins, the game has been particularly popular with American Jewish women for close to 100 years.

My Jewish Learning has a few theories as to why that might be the case. The game used to be more widespread throughout the U.S., but fell out of fashion as the 1920s came to an end. Yet, somehow, it continued to stay popular in the Jewish community. The connection between mahjong and Jewish women was so strong, in fact, that a group of them founded the National Mah Jongg League in 1937.

Now, it’s one of those defining characteristics of the Jewish community, like eating Chinese food on Christmas or lactose intolerance. It’s a fun pastime with friends, but so are a lot of things. What makes mahjong special is that, when we play, we feel like we’re following in the footsteps of our mothers and grandmothers.

The game, for the uninitiated, is similar to rummy.

Players get a number of tiles to start out with different symbols on them. The idea of the tiles is similar to cards in a deck. There are different suits of dots, cracks and bamboo (usually called bam), as well as tiles of dragons, flowers, winds and jokers. The goal is to complete a certain combination of tiles, which are listed out on a card that changes every year. Players get new tiles and discard old ones by passing to other players, drawing from the deck or picking up tiles that other players just put down on the table.

Relatively early on in the game, I lucked out and only needed one more tile to complete my hand. I spent the rest of the game on the edge of my seat, crossing my fingers for my needed eight dot. Alas, another player beat me to the finish line.

The biggest challenge, Cohen advised in our conversation after the game, “is to choose a hand and sort of have a goal. It’s easy to be in between options, but sometimes you have to say, ‘I’m going to do this and stick with it.’ And also learning how other people play, whether they put out more tiles or keep things more concealed.”

Though we may not have played mahjong with our bubbes’ intensity or speed (we barely managed to finish one game in our two hours), learning to uphold any tradition takes practice. We’ll get there one day. 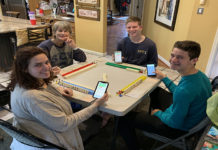