Cybersecurity may sound like something esoteric and inaccessible, but it’s an increasingly important concern for governments, businesses and everyday people.

And for that reason, innovation and business partnerships driven by cybersecurity concerns have taken off between two countries that are recognized cybersuperpowers — the United States and Israel.

That relationship in this specific commercial sector has roots in Silicon Valley and all recognized major American tech hubs, but there are some interesting cross-cultural partnerships happening locally.

The organization facilitating those relationships between Delaware Valley businesses and academic institutions and their Israeli counterparts is the Philadelphia-Israel Chamber of Commerce, which hosted the Israel Delaware Valley Cybersecurity Expo on Nov. 18.

The goal of the expo was to strengthen the academic and business ties between the Philadelphia-South Jersey-Delaware area and Israel, the U.S.’s closest cyberally.

“What we do is facilitate collaboration,” PICC Executive Director Vered Nohi said. “We invite regional chief information officers, chief information security officers, integrators and others who are interested in exploring different levels of cooperation.”

TD Bank, headquartered in Cherry Hill, New Jersey, is just one example of a local corporation employing Israeli tech know-how to fortify its operations’ security. In 2017, TD opened what it calls their Innovation Center in Tel Aviv, where the bank, per its website, is “actively searching for groundbreaking cybersecurity technologies” and “working with Israeli startups and technology companies to develop the cybersecurity solutions for the banks of tomorrow.”

When Nohi led a PICC delegation to Israel in September, they visited the TD Innovation Lab, and she was amazed.

“It was very interesting to see how they’re able to develop and deploy new products for cybersecurity within a very short time. I don’t want to give away any secrets they wouldn’t want me to tell, but I’ll say this: They are able to save significant time in the development by doing so in Israel.”

And time is money, which means American companies partnering with Israeli firms for this type of work are seeing profits, but the good fortune is going both ways, Nohi said.

“Any joint venture that helps Israeli companies to provide more profitable and more competitive services for their clients, both here and worldwide, definitely increases their revenue, too,” Nohi said. “And it creates more jobs here and there.”

As for this week’s conference, no major deals were signed.

“These conferences, these are like first dates … and you don’t sign deals on first dates,” said Inon Elroy, who heads the Israeli Economic and Trade Office in New York. “(This conference) was mostly the beginning of discussions for many of the companies. But these (kinds of conferences) are important both for business but also socially, to strengthen the relationships.”

For Elroy, the strong connection between Israel and the U.S. in the cybersecurity context is not surprising; it’s part of a much larger relationship that transcends commercial sectors and even commerce itself.

“The bonds between Israeli and U.S. partners are very strong in additional contexts,” he said. “Of the 330-plus global offices of companies in Israel, about 60-70% of them are American, and you’ll find that most of the funding that develops Israeli tech companies comes from American sources.

“But it’s not David and Goliath,” he added.

Most years, American investment in Israeli companies outpaces Israeli investment in American counterparts by 70-30, but sometimes it’s 60-40 and, in a one particular recent year, there was surplus on the Israeli side.

“We were very happy to get details from the commonwealth executives during this conference, and it was also interesting to hear how many projects there have been through the Bird Foundation.”

The Bird Foundation is a fund initiated between the U.S. government and Israel 44 years ago, which provides conditional loans for research and development projects between U.S. and Israeli companies.

Since Bird’s creation, there have been more than 930 projects and more than $330 million approved; it’s claimed that the cumulative turnover from all projects has reached $8-10 billion.

“That’s quite amazing, if you ask me,” Elroy said.

Both he and Nohi pointed out that while Israel does receive attention for its strength in technology and cyberinnovation, the strength of U.S.-Israeli commercial relationships is strong across industries. 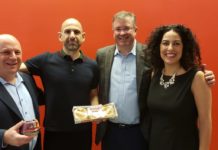 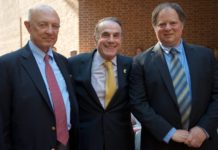