When the Jewish world cycles back to our founding generations, we find in the Torah behavior by the patriarchs that is awkward as well as disturbing. Three times the Torah presents a story about a husband and wife traveling as strangers through an alien culture. Each story involves the husband passing off his wife as his sister, to avoid harm coming to him — with no apparent concern for the potential harm that could come to the wife.

In Egypt, Abraham fears that the Pharaoh will kill him in order to possess Sarah. To secure his safety, Abraham asks that Sarah say she is his sister, not his wife. Many years later, in Gerar, Abraham again says of Sarah “she is my sister,” allowing King Abimelech to procure her as his consort. And a generation later, when Isaac and Rebecca also find themselves in Gerar, Isaac tells “the men of the place” that Rebecca is his sister.

Each of these biblical stories includes an intervention that avoids an illicit consummation. But the behavior of Abraham and of Isaac remains troubling even for traditional Jewish commentators, who feel compelled to offer an explanation. Some imagine a convoluted lineage in which Sarah technically emerges as some distant “half-sister” of Abraham. Others imagine Abraham stalling for time, until the famine that has brought them to Egypt is ended and they can escape — counting on God’s intervention to protect Sarah in the interim.

Such interpretations protect the patriarchs from being accused of lying; the vulnerability that the husbands create for their wives seems to be of little or no account. Put differently, traditional commentators, while noting behavior that exposes women to potential abuse, find a presumably more important concern to which the risk to women is acceptably subordinated. We must think differently, understanding women’s need for protection from abuse as a human right, and making sure our laws reflect that understanding.

An example of how protection of women may still be considered a secondary concern is the current resistance in the U.S. Senate to take action on the Bipartisan Violence Against Women Reauthorization Act (VAWA) which passed the House of Representatives in April as HR 1585.

The original 1994 Bipartisan VAWA has previously been reauthorized three times, in 2000, 2005 and 2013, each time with improvements that offered additional protections for women. Why then don’t all senators agree to support the companion bill to the bipartisan VAWA? What are the concerns to which the risk to women is acceptably subordinated?

While there are a number of expanded protections in the 2019 VAWA, a primary source of opposition is the issue of guns. The Bipartisan Violence Against Women Reauthorization Act closes the “boyfriend loophole,” meaning that those already found guilty of dating violence and/or stalking would be prohibited from owning or possessing firearms.

In the United States, an average of 52 women a month are victims of gun violence perpetrated by an intimate partner. And the majority of women killed in acts of domestic violence are killed by guns. What VAWA seeks to do is to keep guns out of the hands of perpetrators and to remove access to guns from those whom the courts have found willing to harass, abuse and injure women. Restricting those convicted from access to guns is an important step toward tightening VAWA’s protections for women.

But rather than focus on protecting women (and children) from domestic violence, some opponents of VAWA have seized on the “boyfriend loophole,” diverting the discussion from how best to ensure the safety of women at risk to a focus on how to ensure that anyone, even a convicted abuser, should have the right to own a gun. The Bipartisan Violence Against Women Reauthorization Act risks being held hostage by those for whom an unrestricted right to own guns will always be the governing concern — even when it leaves their mothers, sisters, daughters and granddaughters exposed to an increased risk of violence and of death.

The biblical patriarchs were similarly more concerned about their own well-being than protecting their wives from mistreatment. In privileging gun ownership over protection for women, some legislators seem ready to repeat ancient history: displacing protections for women for the sake of promoting the exercise of power by men.

Commenting on Abraham’s passing off Sarah as his sister, one commentator suggests that “no one should rely on a miracle in a dangerous situation. One should secure protection in every way that one can.” The Bipartisan Violence Against Women Reauthorization Act — bill S.2843 — is one such protection. It is our responsibility to urge our senators to assure that the protections that VAWA affords to women should be the priority.

The stakes are too high to rely on a miracle.

Rabbi Richard Hirsh is a member of Jewish Women International’s Clergy Task Force to End Domestic Abuse in the Jewish Community. JWI is the leading Jewish organization working to end violence against women and girls. 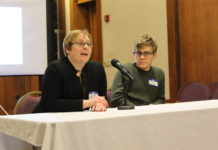 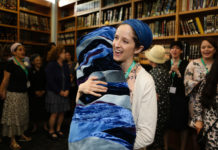 A Look at the Movement to Ordain Orthodox Women Clergy 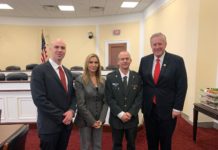