Mitch Albom described it as the most personal thing he’s ever written.

“Finding Chika: A Little Girl, an Earthquake, and the Making of a Family” tells the story of an orphaned Haitian girl who forever changed his life. Released on Nov. 5, the book was the focus of his presentation at Congregation Kesher Israel on Nov. 9.

The writer received national acclaim for his book “Tuesdays with Morrie,” which spent four years on the New York Times bestseller list. The 1999 film version won four Emmy awards, including best TV film, director, actor and supporting actor. Albom’s other books include “Have A Little Faith,” “The Five People You Meet in Heaven” and “The Next Person You Meet in Heaven.” He’s also founded nine charities in Detroit, including a 24-hour medical clinic for homeless children.

Albom, 61, was born in New Jersey. He earned a bachelor’s degree at Brandeis University in 1979 and a master’s degree from Columbia University Graduate School of Journalism, followed by an MBA from Columbia Business School. He moved to Detroit in 1985 where he became a sports journalist at the Detroit Free Press. Today, he hosts a daily talk show on WJR radio.

This year marks the 125th anniversary of the Society Hill congregation’s formation. For the occasion, Cohen reached out to Albom, asking him to speak at a fundraiser.

“I would do anything for him; he’s a great guy,” Albom said of Cohen. “But then when he told me about that particular synagogue and the history that it had, how far back it went and the struggles that it had along the way to stay relevant and thriving, I thought any way that I could help that I would be happy to do. That fact that it coincided with my book coming out was more coincidence than anything else.”

Albom told the story of Chika, a presentation he’s only given a few times before. A video monitor displayed photos and videos that drew both laughs and tears from the crowd.

Albom’s talk began with the 2010 earthquake that hit the Caribbean island nation of Haiti, leaving 300,000 dead and 1.5 million displaced. A few days later, he was approached by a Detroit-area pastor who was concerned about an orphanage on the island. Unable to call, he had no idea if the children were dead or alive.

A few weeks later, Albom was able to arrange for a small plane to fly them to Port Au Prince. What he saw upon landing has stuck with him. He said people covered in white dust walked around like zombies, searching for water and begging for food. The smell of dead bodies filled the air. Miraculously, the orphanage survived but was in poor shape.

So Albom began work improving it.

Three days before the earthquake, a young girl named Chika Jeune was born. She spent her first three years living in poverty, then her mother died giving birth to her brother. Chika was then taken to the orphanage, which at that point been taken over by Albom and renamed the Have Faith Haiti Mission & Orphanage. Since the earthquake, the orphanage had grown and today houses more than 40 children.

Albom said Chika made an immediate impression upon her arrival, being what Albom described as both brave and self-assured. At 5, it was discovered that Chika had a brain tumor. Albom and his wife, Janine, brought Chika to Detroit seeking medical treatment. The doctors gave her four months to live, but the couple refused to accept that. Chika became a permanent part of their household during their search for a cure.

Never having had children of their own, Albom and his wife experienced parenthood for the first time. They cared for Chika, and even took her to Disneyland. At home, they played games like “Fluffy Cozy Bed Camp.” The rules were simple. Chika was the boss, Albom’s wife was the second boss and he was the third boss. Despite coming from different parts of the world, Chika and the couple became a family.

Sadly, after two years of experimental treatments, Chika died. She was 7, so in his talk to the congregation, Albom gave seven things he learned from his time with Chika. He wrote what he learned into the book; all profits from it will go toward the orphanage.

“Becoming parents in our late 50s to a little girl, a Haitian orphan who didn’t look like us, didn’t talk like us and didn’t come from us, but we still couldn’t have been any more of a family than if she looked just like us. There’s all these different ways of becoming a family, but there’s no wrong way,” Albom said. “As long as you have love, you are a family and that was the biggest takeaway from the book.” 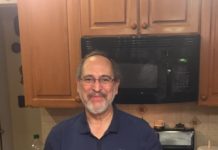 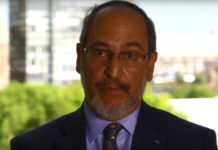 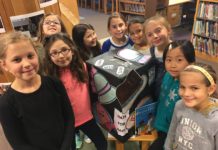