The Philadelphia Jewish community was roiled in May when a video surfaced of children at a local mosque and community center singing an anti-Semitic song in Arabic at an Umma Day celebration.

Now, the Philadelphia Commission on Human Relations has responded to that controversy, detailing the structure of the groups involved, their responses to the incident and future steps planned to prevent a repeat.

After being posted to Facebook on April 22, the video in question was identified and translated by the Middle East Media Research Institute, a watchdog group based in Washington, D.C. Their translation of the song made national headlines and, as a result, Jewish communal leaders called for investigation into the incident.

In a statement on May 22, the Muslim American Society Islamic Center — known within the Muslim community as Al-Hidaya masjid/mosque — wrote that the children singing the songs did not understand the meaning of the words.

Further, the statement said, the two girls reading aloud a speech that, among other violent declarations, decreed that “we will chop off their heads, and we will liberate the sorrowful and exalted Al-Aqsa Mosque,” did not understand what they were saying, either; rather, the speech selection was “primarily sought to highlight the children’s capacity to read and project Arabic rhetoric; however, they have not yet mastered enough grammar to comprehend the words.”

The teaching aide who selected the songs, the statement read, belonged to Leaders Academy, “an independent and separate organization governed by its own board.” The aide resigned, and the organization enlisted Jacob Bender, president of the Council on American-Islamic Relations chapter in Philadelphia, to lead anti-bias workshops on Judaism and anti-Semitism for all staff.

The incident drew the attention of the PCHR, which is broken into two divisions: the Compliance Division, a law enforcement arm that investigates claims into discrimination, and the Community Relations Division, which serves as a mediating party in “neighborhood conflicts” and “intergroup tension,” according to its website.

In this case, the Community Relations Division was asked to investigate.

On Oct. 7, in a letter responding to a Sept. 12 inquiry from U.S. Reps. Lee Zeldin and Scott Perry about the results of the investigation, PCHR Executive Director Rue Landau and chairperson Sally Baraka explained the difference between the two divisions, and presented a bullet-point list of findings. The PCHR, the letter read, “learned from MAS National that the Leaders Academy, the organization that taught the class and created the video at the Masjid, was not affiliated with MAS Philadelphia.”

A recent op-ed, published on JNS.org, takes issue with this claim. The writer, Sam Westrop, provides evidence that MAS Philadelphia and Leaders Academy “have shared officers, an accountant and even a mailing address” in the past. When asked about Westrop’s contention, Landau responded: “Through our investigation, we learned that there are three distinct entities: Al-Hidaya, the Masjid; MAS Philadelphia, the cultural arm of the Masjid; and the Leaders Academy, the academic/educational arm of the Masjid. Whether these entities had overlapping staff at any point was not the focus of our inquiry.”

Aside from that assertion, the rest of the PCHR letter described MAS Philadelphia’s response over the next few months, including written and spoken condemnation of the performances from leaders and the hiring of Bender.

“The PCHR has remained in contact with the Masjid. Last month, the chairperson of the PCHR met with the Masjid’s board leadership to follow up on their next steps,” Landau said in an email. “PCHR leadership will be meeting with a larger group from the Masjid and the Leaders Academy, as well as interfaith leaders, next week to outline further training and education plans going forward.”

Nancy Baron-Baer, outgoing regional director of the Anti-Defamation League of Philadelphia, had not seen PCHR’s letter detailing its findings. But Baron-Baer did speak highly of MAS Philadelphia’s response to the incident itself.

“There was no question that they did a very detailed, complete and what appeared to be very heartfelt apology,” she said. “The individual who was supposedly responsible for the music selection and what occurred stepped down.”

“But, I have also said,” she continued, “that even though we were told the children couldn’t and didn’t understand what they were saying, that that is not an excuse. It is incumbent on the adults in the room, the teachers in the room, to determine right and wrong and what is appropriate for children, and that was not done in that case.” 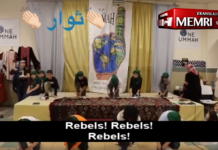