This story originally appeared on The Nosher.

Back in the day, by which I mean the 1950s, before all of us started counting cholesterol and Ashkenazi Jews still feasted regularly on hot dogs and pastrami, my family was devoted to Isaac Gellis deli, founded by the “kosher sausage king of America” in the 19th century. The main reason was because my father’s friend Joe worked for Isaac Gellis and, occasionally, on Tuesday nights when my dad and his cronies had their weekly pinochle game, Joe would show up with a free salami for each of them.

The men acknowledged their gratitude with a tap or two on their cigars. The women, busy at the next table, yelled “thank you” over the click of noisy mahjong tiles, and we kids — if we were still up at 8 at night – were thrilled. We loved how Joe would swing the salamis around on a rope before handing them out.

Mostly though, everyone was happy because we knew that the next night we’d be eating salami and eggs for supper. Back then, this dish wasn’t considered breakfast-for-dinner. It was actual dinner, hopefully served with a potato knish. It was filling, comforting, smelled good and tasted even better. My mother enjoyed making it not merely because everyone loved it, but also because it was easy to cook and took only one pan, so cleaning up was quick (the knish was store-bought).

Who decided that salami and eggs was passe? How could this dish, once so beloved that Mimi Sheraton and Alan King wrote a book called “Is Salami and Eggs Better than Sex? Memoirs of a Happy Eater” fall out of favor?

It’s time to bring it back!

I wonder if people would still fight about the exact right way to make it. Probably. We are a quarrelsome tribe. We will always argue about important matters such as what kind of salami and how to cut it, for example. So I’ll put my two cents in first:

You can’t make proper salami and eggs with anything but a kosher, fresh salami, which has the right amount of garlic and a proper chew. Don’t even think about an Italian pork product or Tevye’s ghost will come and haunt you in the night. Isaac Gellis is gone, but there are plenty of good kosher salamis available these days, including from Hebrew National, Abeles & Heymann, Grow and Behold, and Aaron’s Best.

As for how to cut it: My mother sliced it thin and fried the pieces to a crisp before adding the eggs (the pieces puckered up when the bottoms got crisp and she had to hold them down with a flat spatula when she turned them), but other people’s mothers cut it into cubes or only fried it briefly. The benefit of a crisp fry is that all the salami grease leaches out into the pan so you don’t need extra fat. My mother knew.

Scramble or omelet? In our family it was always pancake style because my mother (who called it “flat fried egg”) didn’t want any arguments. An omelet-ish dish is always supposed to be well-done, whereas people have strongly held opinions about a scramble. Some like it loose, others firm. Flat fried settles the question.

My dad couldn’t digest onions, so there were never any in our salami and eggs, but others included browned, chopped onions. Except for the accompanying potato knish, the only other really important question is whether to serve the dish with mustard or ketchup.

My mother cringed at ketchup (on anything), so our salami and eggs was always served with mustard. There were inter-family fights about whether to use yellow or brown, deli style. At our house, it was yellow. At my aunt’s, it was Gulden’s, which I thought was too harsh, though I’d choose it these days.

I can already hear people thinking about how to modernize salami and eggs for Generation Z or whatever they are now called, but please, do not let me know if you are going to serve salami and eggs with salsa verde, Romesco sauce or tahini. Ketchup’s OK, if you must.

Such a simple dish and so many decisions to make! For folks who haven’t ever eaten salami and eggs, this dish is worth a try, whether you slice or cube the meat, scramble the eggs or not, or slather it with ketchup or mustard. Try not to worry about the calories or fat content, just enjoy yourself! And if you can find a good knish, so much the better.

Published by The Nosher, a 70 Faces Media brand 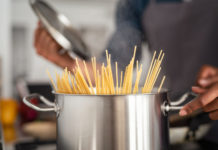 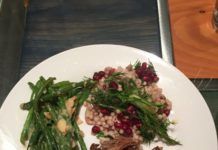 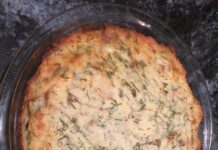