Architect Louis Magaziner designed everything from synagogues and hotels, to mansions, movie houses and public housing. Frank Furness was a mentor, Julian Abele a contemporary and Louis Kahn a protégé. Though, unlike them, he didn’t have a signature style. He couldn’t have; he worked in nearly all of them.

“The styles that he worked in covered virtually every style of American architecture for about 60 years — from the Arts and Crafts of the 1890s … to full-fledged mid-century modern,” said Bruce Laverty, curator of architecture at the Athenaeum of Philadelphia, where the first public display of Magaziner’s collected works, “A Venturesome Spirit: Louis Magaziner in 20th Century Architecture,” will run until Dec. 20.

Of course, there are blueprints, sketches, floor plans and the like, but the exhibit also features accompanying anecdotes about Magaziner the man.

He was the first Jewish graduate of Penn’s School of Architecture, in 1900, and “…represented the architectural component of a Jewish community that, with the dawn of the 20th century, increasingly assumed a leadership role in the civic life of Philadelphia,” says the exhibit’s promotional lit.

Just as Magaziner was the first Jew to graduate from Penn Architecture, Abele was the first African American. Though two years apart at Penn, the two formed a lasting friendship there. They each worked half-days on Saturdays and, for years, met for a weekly working lunch, where, according to Magaziner’s son Henry, they’d offer criticism of each other’s work that was “always well-taken.” Devoted Penn football fans, the two “apparently never missed a home game throughout their lives,” added Laverty.

The exhibit is laid out to present Magaziner’s portfolio not chronologically but categorically — there’s a section for the hotels Magaziner designed, one for the hospitals, the residences, the places of worship, the theaters and so on.

Exhibit-goers will find that among Magaziner’s guiding principles was the idea of architecture as a democratizing force. This is best illustrated by the short dedication Magaziner wrote for the opening of the iconic Uptown Theater, the last Magaziner movie house still standing. Of all buildings, but particularly of the great movie houses and spaces of public performance, Magaziner wrote, “It is a truism that architecture reflects the history of its times and in its best phases is a development speaking in definite form of the thoughts, dreams, aspirations and accomplishment of its generation.”

To that end, the displays suggest that though Magaziner took commissions from the wealthiest of American society, from Philadelphia up to Maine and down to Daytona (see his blueprints for the Bookmyer residence in Overbrook or his expansion of Wingwood, Edward T. Stotesbury’s palatial waterfront estate in Bar Harbor), he was at least equally committed to designing places for everyday people to worship, enjoy popular entertainment and convalesce with dignity.

Renderings and hand-drawn blueprints of the synagogues Magaziner designed are among the several pieces that speak to Magaziner’s professional contributions to Jewish life in Philadelphia and are sure to evoke nostalgia in those who remember the old Jewish neighborhoods before the postwar suburban migration.

A lifelong member of Congregation Rodeph Shalom, Magaziner designed its suburban outpost in 1956, which continues to operate as a synagogue today (Congregation Kol Ami in Elkins Park). He also designed the Love of Israel Synagogue in West Kensington and Temple B’Nai Aaron in Wynnefield, a building notable for featuring a very modern exterior coupled with an interior sanctuary that, as Laverty puts it, “could have been the interior of any sanctuary back to 1500 or so.”

Magaziner had no issue mixing the old with the new; in fact, much of his aesthetic sensibility seems founded there.

At times, guests might notice Magaziner is less the star and more the exhibit’s chosen vehicle for keeping a certain period’s history alive.

The complex of hospitals that would become Einstein Medical Center in 1952 comprised several Magaziner-designed buildings, all of which were associated with the original Jewish Hospital, which was founded during the Civil War to, Laverty said, “help recovering Jewish soldiers keep kosher.”

Arguably the largest commission of Magaziner’s life came right before the Depression. Magaziner was hired to design an expansion of the George V hotel in Paris. Construction began in 1927 and was halted in 1929. It sat unfinished until 1940.

“According to family lore,” said Laverty, “the hotel was finished according to Magaziner’s plans, which were there on-site, during the Nazi occupation of Paris.”

“The Nazis decided they would complete it. I don’t know whether they realized he was Jewish or not, but, suffice it to say, he didn’t get his commission.”

That hotel remains in operation today as the ultra-luxurious Four Seasons Hotel George V in Paris’ 8th arrondissement. Said Laverty, “You won’t find that on the Four Seasons’ website.” 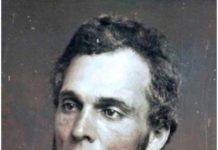