There was no heating at the congregation’s first Chanukah celebration in its new building. But even though renovations were still underway, the room was warm from all the lit menorahs people brought.

One woman showed her newborn to the crowd. It was an experience Louise Levy described as moving.

Levy is one of the earliest members of the Kehilat HaNahar, the Little Shul by the River. The Reconstructionist congregation in New Hope recently celebrated its 25th anniversary.

In the beginning, there was no building, no rabbi, not even an official name. More than two decades later it has all of those and is home to more than 130 families.

Before Kehilat HaNahar, area Jews met in people’s homes for Shabbat services and holiday celebrations. But over time the group grew and started to meet in public spaces in Lambertville, New Jersey, and at the Solebury Friends Meeting House in Bucks County.

That’s when Ellen Miller took notice. She attended a holiday service and has been a member ever since. She said the area’s Jewish community isn’t clustered like in big cities, but more spread out. So the synagogue was created to act as a focal point and bring people together.

The congregation formed in 1994 and was led by Sandy Roth, who at the time was a student at the Reconstructionist Rabbinical College in Wyncote. Levy started attending services after moving to New Hope from Boston. She recalled the difficulties in the early days of creating a new organization.

“The challenge at that time was that we were stating a congregation, all the logistics of figuring out who we were and what we were about,” Levy said. “You have three Jews in a room, and you have four opinions.”

Roth became ordained and served as the shul’s first rabbi. In 1996, the congregation bought a schoolhouse building in New Hope dating to 1851. It previously was used as storage for a restaurant and catering business.

Levy said the first seder at the property was a “hard-hat seder,” where everyone wore hard hats because renovations weren’t complete. The building was dedicated in 1998 and has been home to the synagogue ever since.

Roth served Kehilat HaNahar until dying from lung cancer in 2011, and the congregation’s sanctuary was renamed in her honor.

Rabbi Diana Miller was brought on to lead the congregation. She said what attracted her to Kehilat HaNahar was its location, the historic building and the dedicated community. She found it exciting and even said the name was enchanting.

In September, the shul held a picnic to celebrate the 25th anniversary with food, music and games. On the Shabbat before, founding members were named special guests and given the chance to share their memories of early days.

“It means a lot to the founders that they had this dream and vision and this scrappy beginning,” Miller said. “And it was incredibly moving to hear that outside of their children, that coming to shul and seeing it thriving was one of their most meaningful accomplishments.”

One of those founders was Abraham Leibson, although he describes himself as an “accidental founding member.” He first heard about the congregation forming from a next-door neighbor after moving to New Hope. It was Leibson’s wife who encouraged them to go, which surprised him as she is Catholic. But they gave it a try and have been members ever since. Leibson said the congregation is accepting of people of all backgrounds and is comprised of interfaith, interracial and LGBTQ couples.

Today, the Kehilat HaNahar continues to grow. Over the summer, Rabbi Jonah Rank was brought on to direct the shul school. And many new members have found their place there.

Gerry Bogatz has been a member for about three years. She enjoys Kehilat HaNahar’s origin story and is glad to be part of its future.

“It’s just absolutely a delightful and charming story that people cared that much to make the effort, put in all that hard work to make it a reality,” Bogatz said. “It gives it a wonderful history to look back on. It’s special in that way.” 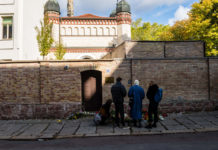 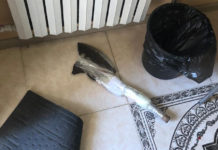