When a young Asya Zlatina read Anne Frank’s The Diary of a Young Girl, she wondered what the famed diarist would think if she knew that millions around the world were reading her most private thoughts.

“Oh God,” Zlatina recalled thinking, “I would never want anyone to ever read my diary.”

This past summer, Zlatina launched a series of shows on that premise. Only instead of others reading her diary, she reads it aloud to them.

The series, called HashtagTMI, gives participants — Zlatina creates a lineup of readers for each show — the chance to read their diary entries to a room full of listeners. The shows also include dancers, who share their diaries and interpret them through dance.

So far, there have been three HashtagTMI shows, and Zlatina, who is Jewish, plans to continue scheduling shows for every few months.

The next will be Dec. 14, with a focus on “powerful stories from powerful women,” Zlatina said. Originally, this was supposed to be the third one, but a group of people approached her after the second show and asked for something sooner.

Zlatina, a professional dancer, said she created the series to raise awareness of how dancers create their performances. Often after her modern dance performances — modern dance is not as literal as, for example, ballet — audience members would come and tell her they didn’t understand what her show was about.

She thought a solution might come from reading stories. Audience members could glean some of the artistic expression that goes into dance if they heard the dancers read stories and then saw them interpreting those stories through dance.

“That might bridge some gaps for people,” Zlatina said. “Then, when they go into the theater the next time, they might think, ‘Oh, I know how maybe they possibly arrived to that movement situation.’ The idea is almost someone graduates to a place where they feel that modern dance is accessible, without leading them.”

Zlatina wanted those stories to be real, to bridge divides and create more love between people. Specifically, she wanted those true stories to be diary entries, because diaries aren’t written for an audience, and people alter their writing if they know others will read it.

The only stipulation for HashtagTMI is that readers must read their diaries exactly as written, Zlatina said — only changing names of other people mentioned in their diaries so they can’t be identified.

“I have friends all over, on the full spectrum of what’s going on in the world today, and people have different experiences and they’re based on their own, personal experiences,” Zlatina said. “I was thinking, OK, well, this is also a really great chance to get some people together who might not otherwise understand these experiences and give them a walk in that person’s shoes. They don’t have to agree, they don’t have to follow in their footsteps, but they can certainly put a face to the story, so that it becomes more human.”

The first HashtagTMI took place June 15, just a few days after Anne Frank’s June 12 birthday. As perhaps the most famous diary writer in the world, Anne Frank has served as an inspiration to Zlatina in her HashtagTMI mission.

“When I think of ‘diary,’ I automatically think of her,” Zlatina said.

Between that and the fact that most of the readers were Jewish — Zlatina said she had an easier time getting her Jewish friends to participate — the first show ended up with somewhat of a Jewish theme.

Each show also includes a drinking game, where audience members can drink whenever a certain word is said. That first show, the word was “out” in honor of Pride Month.

The second show took place Aug. 24 at the Adrienne Theater. The most recent HashtagTMI on Oct. 12 was intended to be more lighthearted than previous shows.

David Kieve, a friend of Zlatina’s, hosted it and read some of his poetry at the show. Kieve hosts a lot of artistic events at home, he said, and has read his poetry to audiences before.

With each show that passes, Zlatina hopes more people will learn about HashtagTMI and more people, with more diverse experiences, will be willing to share their own diaries.

“I encourage people to come and see what it’s all about,” Zlatina said. “If everyone found a safe space to express themselves, we would be living in a much safer and better world.” 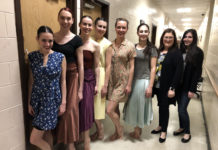