The same week that the American Jewish Committee released the results of a survey on American anti-Semitism, the subject’s foremost expert, scholar Deborah Lipstadt, traveled to the nation’s capital to talk about the subject at Washington Hebrew Congregation. Just days before, a security guard found anti-Semitic and anti-Israeli graffiti scrawled on the back door of the building.

Lipstadt, a professor of history at Emory University, said anti-Semitism is a singular form of discrimination.

“It has the unique distinction of coming from the right and the left. It’s the only prejudice that comes from both sides,” Lipstadt told the Washington Hebrew audience on Oct. 24, noting how anti-Semitism has evolved to the point that extremists on both ends of the political spectrum use anti-Semitic stereotypes to further their agendas.

Both views on Jews are dangerous, Lipstadt said.

Denying anti-Semitism on one’s own side can lead to genocide, she said. No genocide began with action; genocide begins with words, she said. And words led to the mass shootings at the synagogues in Pittsburgh, Poway and Halle, Germany.

The shooters left nearly identical manifestos, she said. They all got their mindsets from similar sources and all targeted Jews. White supremacists, she said, blame Jews for a conspiracy to replace “white Christian society with black people, with brown people.”

Lipstadt said white supremacists believe that people of color aren’t capable of elevating themselves in society, and therefore must have gotten assistance from the Jews, who are seen “as devils,” who are able to disguise themselves.

“Unlike the racist who punches down,” she said, “the anti-Semite punches up.”

This is especially true, she said, of left-wing extremists, who don’t see Jews as part of a marginalized group. “They see the Jew, who is to them a white person, a wealthy person, ipso facto who has power.”

Wherever the hate comes from, however, the AJC survey released just prior to Lipstadt’s visit makes it clear that the vast majority of American Jews think that anti-Semitism is a serious and increasing problem in the country.

Nearly 90% of those interviewed think that anti-Semitism is a problem in the United States, 38% characterizing it as a “very serious” problem.

The survey also made it clear that Jewish institutions are sensitive to the issue as well.

More than half of the respondents — 57% — said that their local Jewish institutions have security guards; 52% said their institutions had hired police officers for safety.

The fear of anti-Semitism has changed behavior in community members as well: 25% said they avoid going to “certain places, events or situations” out of concern for their comfort or safety as Jews, and 31% said they avoid “publicly wearing, carrying, or displaying things that might help people identify you as a Jew.”

Most of those who responded, however, had not been attacked because of their religion (98%) and had not been the target of an anti- Semitic remark offline (78%) or online (80%).

“American Jews could not be clearer about the reality of anti-Semitism in the U.S. This hatred is real, comes from multiple sources, and is growing. It needs to be taken seriously and dealt with in a sustained, multi-pronged response,” said American Jewish Committee’s CEO, David Harris, in a statement.

Conducted by SSRS, the survey had a margin of error of 4.2 percentage points.

Samantha Cooper is a staff writer for Washington Jewish Week, an Exponent-affiliated publication. 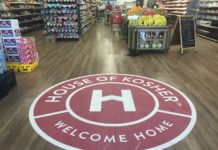 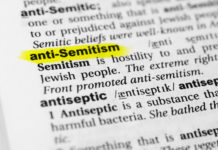