Throughout this Sukkot, lulavs were shaken but so, too, were sukkahs — many to their makeshift foundations, by a record-setting storm classified as a “weather bomb.”

“In the 31 years that I’ve been in Broomall, we’ve never had anything close to this, in terms of the winds,” said Rabbi Barry Blum of Congregation Beth El-Ner Tamid. Sections of the rabbi’s sukkah were strewn across his front yard, as though a bomb had detonated nearby, lending credence to the storm’s explosive designation.

Sukkot is a festival holiday, a time after the earnestness of the High Holidays to be lighthearted and enjoy a harvest’s bounty. If that’s Sukkot’s sweet carrot, then its didactic stick reminds us that sukkahs also symbolize darker times during the Exodus when the Jews wandered the desert for 40 years and sheltered vulnerably, in fragile dwellings.

“It’s really very appropriate in a lot of ways,” Blum said of the storms that made building and keeping sukkahs upright this Sukkot particularly challenging. “The elements have often dictated how we’ve lived.”

Still, the sukkah is supposed to be symbolic. Eating, even sleeping, in the sukkah is meant to serve as allegory, a reminder of existence’s tenuousness. The goal for most is to conceptually recognize transience and vulnerability, not to actually experience them literally.

But, somewhat ironically, the lessons of Sukkot, most often honored from a safe physical and emotional distance, were actually felt a little bit more closely by some members of the Jewish community this Sukkot.

Miriam Steinberg-Egeth, director of the Center City Kehillah, led a sukkah-building campaign throughout Philadelphia, and especially meaningful to her was the sukkah raised in Julian Abele Park in Graduate Hospital. It’s the sukkah closest to her home, the one her son and husband help her to erect annually.

On the Wednesday night of Sukkot, Steinberg-Egeth was walking to an event that had been relocated indoors due to the weather. Her route took her through the park, where she noticed that the sukkah had toppled onto its side. It was clear after just a cursory examination that the case was terminal — the sukkah would have to be dismantled.

“It was really, really sad. I knew (deconstructing the sukkah) was the responsible, correct thing to do,” Steinberg-Egeth said, “but I still couldn’t believe it.”

And then she woke up Thursday morning to a cognitive light bulb: What if she used the parts of the sukkah that hadn’t been damaged to erect a new sukkah? Sure, the dimensions would be different — it wouldn’t be the conventional rectangle — but Sukkot could go on as planned.

“I called my husband and told him to meet me in the park.”

That night, still plenty windy, families from her son’s school showed up. On Friday, she turned to a neighborhood group, and a few more people turned up to raise the sukkah and each other’s spirits — Jews and non-Jews and people who, for reasons they can’t even articulate, enjoy the presence of a sukkah in their community park.

Astonishingly, the sukkah was back up in time for the Makom community to have their after-school event; Heymish Minyan, as planned, had their Shabbat in the sukkah.

“It was this great, triumphant return,” beamed Steinberg-Egeth. “It felt very much in the spirit of Sukkot. I kind of understood the vulnerability part of it in a different way.”

Though the new sukkah looked conspicuously jury-rigged, even for something that’s supposed to look MacGyvered to begin with, some sukkah-goers liked the look of sukkah 2.0 even better.

“One woman said, ‘The first sukkah was so polished and neat, and this is so rough and tumble and … burlappy!’” Steinberg-Egeth recalled.

But of course, all around the region, it was less about how the sukkah looked and more about how, against the odds, they came to rise again.

As Jews, we seem to keep rebuilding things, acknowledged Blum, who rebuilt his own sukkah after what he described charitably as “a disaster.” 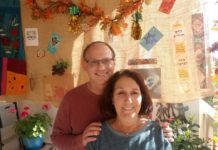 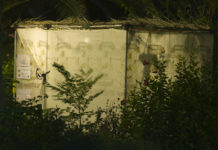 Why Do We Sit in the Sukkah? 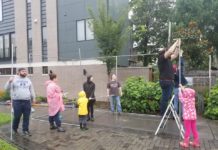