In a more technical sense, how could you already be an adult without having had a bar mitzvah? Questions like these might twist even Maimonides’ brain into an advanced yoga pose. But, as a practical matter, there are myriad reasons why a Jewish adult might have not gone through the holy rite of passage as a young man or woman. The more interesting question might be: Why would they want one?

What motivates adults balancing jobs, kids, mortgages — what compels them to seek this knowledge, attain this milestone that comes with no tangible reward (one would have to think the adult bar and bat mitzvah’s gift purse typically pales in comparison to the 13-year-olds)?

According to Rabbi Howard Cove, now the rabbi of Beiteinu Synagogue, who has led several bat mitzvah classes for adult women at both Temple Sinai in Dresher and Congregation Kol Emet in Yardley, there are several reasons, especially for Jewish women of a certain age.

For younger women, Cove suggests, women in their 40s with kids of their own approaching bar and bat mitzvah age, what it’s often about (at least in the beginning) is being a good role model, modeling for their children that Jewish learning and Jewish customs are important parts of individual life and an important part of family life.

But for the slightly older bat mitzvah, it’s often about something more personal.

“You have to remember that the Torah often wasn’t accessible to girls,” said Cove, referring to women in their 60s, 70s and beyond whom he has tutored.

“They could do Haftarah, but they could not do Torah, and so with some of these women it was ‘I was never allowed. I couldn’t do what I’m [now] preparing to do for my adult bat mitzvah.’”

In other situations, women who have studied with Rabbi Cove later in life say they were given the option of having bat mitzvahs as girls but instead chose celebrations like Sweet 16s, eschewing the heavy time commitment of bat mitzvah study at a time in their lives when Judaism wasn’t as important to their sense of self as it would become.

“And some women,” Cove said, “just loved to learn. They were very bright, they had careers, and they wanted to learn more about their own faith, their own religion and their own Judaism.”

Unique to all adult b’nai mitzvah, regardless of gender, is an exercise of free will and, often with that, an increased level of accountability.

Unlike your average adolescent approaching bar or bat mitzvah age, who may, more often than not, take the idea of a bar or bat mitzvah — and the compulsory nature of the attendant preparation — for granted, adults enter into the process completely of their own volition, eyes fully open to a time commitment that might span anywhere from 10 months to two years.

This actually makes for a process that’s a little less stringent and regimented than what you may remember from your own bar or bat mitzvah preparations.

“At the beginning of the process in each case, we never established a date for the bat mitzvah,” Cove added. “We went six months, we went eight months, we saw where the progress was, and then we decided, OK, six months from now, a year from now, we’ll have a date.”

“It was kinda cool,” Cove continued.

“We were learning for learning’s sake at the beginning, with the knowledge that ultimately it would lead to a bar or bat mitzvah, but we didn’t put the pressure on the group, or on me, to decide, ‘OK, we’ve got 10 months from start to finish.’”

It’s this kind of latitude that the student of conventional bar or bat mitzvah age might benefit from but very rarely has as a luxury.

“The process grew organically (with the adults), and that’s a lot different from how it usually goes (with the kids).”

Organic or not, there’s always that fear of being up there on the bimah, on that religious equivalent of a pitcher’s mound, essentially all alone, yad in hand, looking down at these foreign marks on an ancient page … and just blanking.

This kind of unadulterated terror transcends age, which just goes to show maturity and fear of public speaking are by no means mutually exclusive concepts. It’s even reasonable to surmise that, for many, the dread of public speaking actually gets more acute with age.

School-age kids, like it or not, have to give reports and presentations in class all the time. But, depending on one’s profession as an adult, one’s public speaking chops, not to mention nerve, can atrophy.

That may be why, more than anything else, Cove thinks it’s pride in conquering that fear and standing before their community, chanting Torah and leading the service, that becomes the most lasting memory for many of his adult bat mitzvah students.

“The fact that these women in their 40s, 50s, and 70s get up in front of the congregation, when they’ve never before had an opportunity to do this … these are the memories they take with them that excite them to this day.”

Loath to admit favoring one demographic cohort over another, Cove concedes that it does feel different to work with the adult groups and see them succeed.

“There is a recognizable, heightened sense of joy and accomplishment for me to have a group of adults finish the process, as opposed to me just standing with an individual child.”

Of the adult classes Cove’s shepherded all the way to bat mitzvah, there’s a special kind of pride: “I was proud as a peacock to be able to introduce these women to the congregation.”

Over the years, Cove has lost touch with some but kept up with several of his bat mitzvah groups’ alums.

“I know if they thought about it, (the bat mitzvah) would be one of the top five to 10 accomplishments in their lives, which is pretty cool.” ❤ 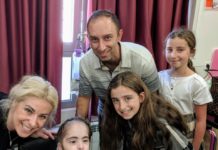