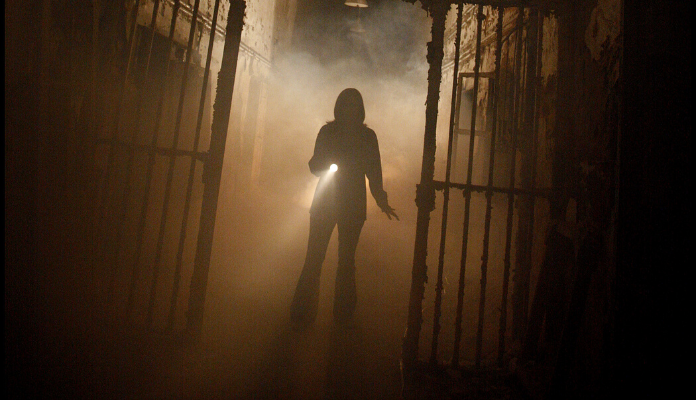 It’s not every day that a job posting for zombie dancers pops up, so Isabella Dorfman applied.

Now she’s one of several Jews working this year at Terror Behind the Walls, which is billed as the largest haunted house experience in the United States outside of a theme park.

Dorfman graduated from Bryn Mawr College a few years ago and works in the city. Society Hill Synagogue is her go-to for services, and she’s an active attendee of events at Chabad Young Philly.

She wouldn’t describe herself as a haunted house fan, but so far her experience working at one has been enjoyable. As guests exit the prison, they’ll encounter Dorfman performing choreographed routines with the rest of the zombie dance team. It takes 45 minutes for her group to get its makeup on, with a lot of attention to detail, as they’re some of the most visible actors at the prison. It takes 20 makeup artists about three hours to prepare the entire cast.

Ellen Feist is just one of the behind-the-scenes people who makes it all happen. As Eastern State’s marketing and communications strategist, she has worked the last 12 seasons of the popular haunted house. When people at her synagogue, Temple Emanuel in Cherry Hill, New Jersey, ask about her work, her husband is happy to oblige.

“He loves telling people about my job because he thinks it’s more fun,” Feist said.

Feist got a chance to take a group of about 20 from the shul to the attraction. She said most of them had never been, and she had a fun time seeing their reactions.

Meanwhile, Francine Schiffman has worked as manager of group sales and guest support at the prison for four years. She said there are a few local synagogues that have organized visits to the attraction. One of the largest Jewish groups was led by Rabbi Yitz Levi of Atlantic Seaboard NCSY with more than 100 youths attending.

When it comes to balancing work at a haunted house with Jewish life during the High Holidays, it can be a challenge. Dorfman was able to get Rosh Hashanah and Yom Kippur off, but not Sukkot.

“This happens during High Holiday time, and that can be really challenging,” Dorfman said. “I go to Shabbat dinners every single Friday night, but haven’t been doing that this month so I am definitely feeling a bit disconnected from my usual community.”

Striking a balance is tough.

“Sometimes it can be difficult, because it’s so busy this time of year with the holidays and launching this massive haunted house,” Schiffman said. “Yesterday when I got home from work, my sukkah had blown over, and it was destroyed. My husband’s working on fixing it, but it’s tough to balance everything. It’s like boom, boom, boom, holidays. And then boom, boom, boom Terror Behind the Walls. So it’s a busy but a fun time.”