Harry Schley may be one of the few people in Philadelphia able to speak both Yiddish and Japanese.

The 31-year-old Philadelphia native is a Ph.D. student in the Department of East Asian Languages and Civilizations at the University of Pennsylvania, specializing in Japanese art. Schley is Orthodox and a member of Mekor Habracha/Center City Synagogue.

Several years ago, after completing his bachelor’s degree, he and his wife lived in Japan for 10 months. Later, Schley was accepted into the Fulbright Graduate Research Fellowship and the couple, along with their three children, returned to Tokyo for 15 months. Now back home, Schley works to achieve his dream of becoming an art museum curator.

How did you come to study Japanese art?

The short answer is one thing led to another. But to give a slightly longer answer, when I was a kid there was a lot of Japanese media and culture floating around in the United States, and it got me interested in Japan as a place. So when I went to college, I went with the decision that I was going to spend a semester abroad in Japan.

I ended up in the joint program at Jewish Theological Seminary and Columbia University, and the only functional way I could study abroad in Japan was also if I majored in East Asian languages and cultures. I had always been interested in arts and antiques, so I put them together and did my Ph.D. in Japanese art history.

The Jewish community in Japan is really nice. It’s a small community, but it’s a very committed community. It’s a special place to be. There are probably approximately 2,000 Jewish individuals living in Tokyo, in which, on any given Shabbat, 40 go to one of the three synagogues in Tokyo.

Most Jewish individuals in Japan are there for business, and usually there for a handful of years and, by and large, not particularly active in Jewish community life. Even if they’re not actively seeking Jewish involvement, they often connect one way or another and create this large, loose web of relationships.

What was it like living as an Orthodox Jew in Tokyo compared to Philadelphia?

In some ways very different, in some ways basically the same. People often assume it’s very hard or challenging to live an observant Jewish life in Tokyo, and the reality is that it’s not. There’s easier access to things in Philadelphia than in Tokyo. In Tokyo, it can be very challenging to find kosher products.

Meat can be purchased through the synagogue, but all cheese has to be imported privately. So every time my mother came to visit she brought a suitcase of cheese. I’m not joking. At any given point, we’d have 10, 20 kilos of cheese in our freezer.

Wait, couldn’t you just live without cheese for a while?

We like cheese. We really like cheese. Part of it is that we have very young children, and it’s very important to teach our children that you can live a Jewish life anywhere.

How familiar are people in Japan with Judaism?

For many, I was their first outwardly observant Jewish person they’ve interacted with. I’ve had great conversations with some of my colleagues and in some small little towns where they are asking all these questions about kashrut because the idea of someone that has all these food rules are uncommon there, so people are often curious.

What is something you wished Jewish people knew about Japan?

A lot of people assume you can’t be an observant Jewish person and live in as remote a place as Japan, and the one thing I want them to know is that Jewish life is communal life, but we built communities everywhere. So even in remote places, we have thriving communities. 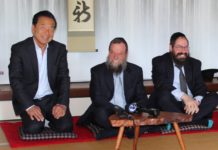