Something caught the eye of Rabbi Lance Sussman nearly two decades ago when he first came to Reform Congregation Keneseth Israel: a large stained glass window in the lobby in memory of President Theodore Roosevelt.

“What is a big memorial to Teddy Roosevelt doing in a synagogue?” Sussman wondered.

No, the 26th president wasn’t Jewish. But the story behind the window is at the heart of Temple Judea Museum’s latest exhibition, on display from 9 a.m. to 5 p.m. from Sept. 20 to Dec. 20, except for Saturdays and holidays.

A few years ago, Sussman called Rita Rosen Poley into his office. She is the director and curator of museum. With 2019 being the centennial of Roosevelt’s death and the unveiling of the memorial window, Sussman suggested they do an exhibit for the occasion.

“I never refuse a challenge from our rabbi,” Poley said, “and the story did intrigue me.”

The century-old window was commissioned by Rabbi Joseph Krauskopf, who was part of the first class at Hebrew Union College-Jewish Institute of Religion and came to Keneseth Israel in 1887. During the Spanish-American War, he served as leader of the National Relief Commission and visited Army camps in Cuba. It was there he met then-Col. Roosevelt and conducted services for the Jewish soldiers in the Rough Riders. The two stayed in touch and remained lifelong friends.

“Both Roosevelt and Krauskopf were truly men of their era,” Sussman said. “They were incredibly energetic, had their hands in a million things and were successful. It’s not inconsequential that they were attracted to each other.”

When Roosevelt died on Jan. 6, 1919, Krauskopf and his congregation set out to create a memorial. For the project, they commissioned Violet Oakley, who painted the 43 murals in the Pennsylvania State Capitol. The project was passed along to her student and life partner, Edith Emerson, who completed it in less than a year. The window tells the story of Elijah, with the artist drawing a parallel between the president and the biblical prophet. The completed project was dedicated in November 1919. In the late 1950s, it was moved from the synagogue’s Broad Street location to its current Elkins Park campus.

The museum exhibit is composed of artwork, photographs and antiques retelling the story Roosevelt, his friendship with Krauskopf, the origins and creation of the memorial window and of its depiction of Elijah. Poley said the task was difficult, as it was a “big story.”

Everything for the exhibit had to be loaned from institutions or private collectors, commissioned by local artists or created by Poley herself. A few artifacts came from the congregation’s archive, such as Krauskopf’s handwritten remarks read at the window’s dedication. Other items, like two antique books on display, were bought on eBay.

“This is a storytelling exhibition,” Poley said. “And it’s a story about our community here at K.I. and its history and how this life of this president and this rabbi and this artist and the subject of the window, how to renew that story and tell it to new generations.”

The works of several local artists, each of whom created a unique interpretation of one aspect of Roosevelt’s life, will be part of the exhibit. Artist Mordechai Rosenstein, 85, of Elkins Park, contributed a watercolor to the show. Rosenstein has known Poley since 1967 and has participated in previous museum exhibits. For his piece, he was inspired by Roosevelt’s famous quote regarding foreign policy: “Speak softly and carry a big stick; you will go far.” His work-on-paper contrasts this idea with the story of Elijah hiding in a cave where he witnessed a great commotion followed by the voice of God.

“It’s kind of like the reverse: Speak softly, but better have the big stick ready to get somebody’s attention. That’s the way I saw it,” Rosenstein said. For viewers who can see this connection, he added, “they will really enjoy it.”

Marlene Adler, 63, is a member of both the synagogue and the museum’s artist collaborative. She created a charcoal and pastel portrait of Roosevelt with a teddy bear in his pocket.

“I appreciate the opportunity to exhibit,” Adler said. “I always try to do something that has thoughtfulness in it and that I’m proud of.”

As for this show, she said, “The variety of the artwork is so eclectic and so different, you’re going to be very surprised.” 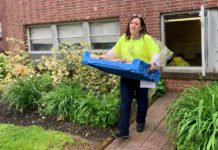 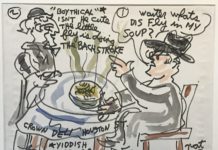