Chef Jeremy Gross has an impressive Philadelphia food resume, but his award-winning brisket recipe is his mom’s. The old-school dish uses several ingredients that might not be found in a high-end chef’s kitchen. But we’ll get to that.

Now at the helm of acclaimed Queen Village newcomers Olly and Gigi, Gross honed his cooking knives in the Garces restaurant group, Bistrot La Minette, Southwark and in the kitchen of Camp Tel Yehuda in Barryville, New York, where he spent summers from childhood through his teen years, and returned in his professional capacity to feed the campers.

“I started cooking about seven years ago as a way to earn some extra money while I was a student at Temple,” he said. “I got more and more interested in cooking, I did a lot of what the industry calls ‘French overtime’ — unpaid hours to get on-the-job experience in new techniques and recipes.”

He did finish his degree — a political science major with a minor in Hebrew (he chuckles a bit at this) — because his interest in the culinary profession was clearly steering his path into the restaurant world.

Gross’ current position was somewhat serendipitous. He had cooked at Southwark, which is owned by Chris D’Ambro, in the past, and they had parted friends. Last winter, Gross was in Europe on his honeymoon, and happened to read an article that D’Ambro was opening a new place. He reached out, the two met and more or less picked up where they left off.

Gross was able to visit the new site, which became Olly, while it was under construction, so he had a role in shaping the look and feel of the restaurant, as well as the design of the kitchen and the menu. As soon as the Olly deal was struck, Gross jumped back into the kitchen at Southwark.

“I had been out of the kitchen for two months; I had to get back into it before opening the new place,” he said.

Olly opened in April and Gigi, an adjacent pizzeria, is slated for an early fall opening. Olly has received rave reviews, and Gross is grateful.

“There is a plethora of great restaurants in Philly, so it’s really hard to stand out,” he said. “We were so happy that we’ve been well received and the neighborhood is embracing us.”

“We were conservative. My mom was on the synagogue board, so we were very involved. It was a small, close-knit community,” he said. “We had Shabbat dinner every Friday, and holidays were a big deal. We would go to friends or family, there would be tons of people and I can’t even imagine a Jewish holiday without my mother’s brisket.”

“I made this as a staff meal for a competition and it won. It’s a really traditional brisket, and it’s very simple — no need to sear it first or chill it overnight, slice and reheat, which I think is always a bad idea for meat despite the fact that many brisket recipes recommend it,” he said.

“You just throw everything in the pan, cover and braise. The sugars in the ginger ale and ketchup sort of caramelize on the top. It’s best served right out of the oven with roasted fingerling or small red potatoes.”

Heat your oven to 300 degrees.

Scatter half of the sliced carrots, celery and onion in the bottom of a pan. Place the brisket on top. Scatter the remaining vegetables on the brisket.

In a small bowl, mix the ginger ale, ketchup, soup mix and herbs. Pour the mixture over the brisket. Add enough water to bring the liquid halfway up the brisket.

Cover the brisket tightly with foil and cook it in your oven for 4-6 hours until the meat is fork tender.

Remove the brisket from pan, slice it on the diagonal across the grain and serve it with the braising liquid. 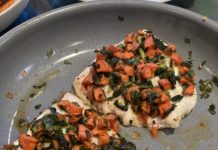 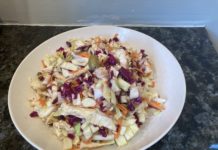 The Sides Have It 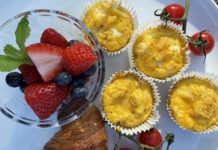