Women of Vision, which will celebrate its 25th anniversary with a dinner and address from National Council of Jewish Women CEO Sheila Katz at the Rittenhouse Hotel on Sept. 24, has a bit of an unusual name.

Typically, the Jewish women’s foundation of a particular region — be it Chicago, or Broward County — is called just that: The Jewish Women’s Foundation of X.

Sally Cooper Bleznak, founder of Women of Vision, doesn’t remember exactly why the Jewish Federation of Greater Philadelphia chose the name back in 1994. But what she does know is that the unique nature of the name reflects something true about the women who make up the group.

“Whether it is funding a project that deals with bullying and relationship aggression or career advice or financial and legal coaching for seniors, our members see themselves as being on the front lines of current issues,” Bleznak said. “They are out there evaluating grants that will create social change.”

Iris Leon, manager of Women of Vision, explained that the group’s philanthropic efforts are unique for any charitable organization, let alone a Jewish women’s foundation. Rather than a simple “money in, money out” structure, as she put it, members — anyone who has made a donation since the founding — vote on organizations that have been carefully researched and selected by committee members. Grants are then made for one- and two-year periods. The funds are intended for women and girls, Leon said, with the bulk of the grants going toward Jewish women and girls in the Philadelphia area.

Since Women of Vision was founded, nearly 600 women have joined its ranks, with well over 500 still active. To Leon, the democratic control of determining disbursements is “the real value add of this group.”

“The process around it, and what it does for members, is pretty powerful,” she said. Besides teaching their members how to be more effective, conscientious philanthropists, she said, it also just gives them more of a sense of ownership of the group.

There is “no social or financial hierarchy,” said Bleznak, noting that each woman, no matter what she’s given, has the same voting power. “This is one of our greatest strengths.”

Around 100 women joined the group in its initial stages, disbursing around $16,000 in grants per year. Now, Leon says, Women of Vision directs close to $120,000 annually to social change organizations in the U.S. and Israel. They’re inching up on raising $250,000 in this year alone.

And this year, for the first time, there will be not one, but two substantial grants made to Israeli organizations.

With the fund sitting around $3 million, according to Leon, and a slew of new members joining this year, the plan is to continue scaling up.

“There’s a certain grit and a entrepreneurial streak in this group,” she said.

This year’s anniversary celebration will have some formal function — Marcy Bacine will finish her tenure as chair, and Mindy Fortin will rotate on — but the idea is to have a celebratory, relaxing evening. Around 175 people are expected to attend dinner and the evening’s programming, Leon said.

Katz’s work at the NCJW, Leon believes, aligns nicely with the group’s ethos and vision. And aside from her work there, she happened to be one of the more prominent Jewish women to speak out against Michael Steinhardt, who she said had sexually harassed her for years.

Significant as that all is, Leon says, it is still an evening of celebration.

“Advocacy work can be very serious, and that’s the space that she lives in,” Leon said. “But the tone is not going to be that heavy.”

A quarter-century in, Bleznak still finds herself energized by what she and so many other women have set out to accomplish.

“I am in awe of how compelling our original mission still is,” she said. By “lending a helping hand to our sisters who are disadvantaged and economically less fortunate in life than we are,” she continued, “we are attracting young professionals who bring a lot of experience to the table.” 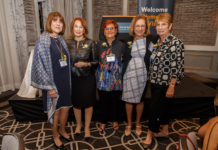 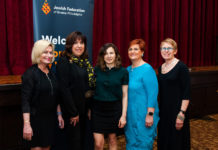 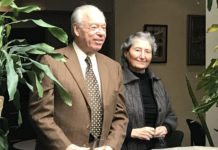