Some traveled across the country, while others have been a part of the community for decades. We spoke to three of them about what motivates them, what their backgrounds are and what they’ve got planned for the future.

Born and raised in Israel, she has lived in the Philadelphia area for most of her life. She is a longtime faculty member at the Kripalu Center for Yoga and Health in Massachusetts and most recently worked as a rabbi at large and as spiritual leader of Kesher Shalom in Abington.

Brier has a master’s degree in organizational psychology from West Chester University and a master’s degree in Jewish studies from the Reconstructionist Rabbinical College in Wyncote. She has years of experience as a congregational rabbi and described herself as a scholar, spiritual mentor, inspirational teacher, artist and musician, with training in religion, psychology, art, yoga and meditation. Her goal is to encourage spiritual conversation, connect with people and build community.

“I’m looking forward to enhancing the reach of my work into another community and growing something together,” Brier said, adding that the life of a rabbi is “an interesting and meaningful path to follow. I’m doing it because it’s interesting in a way that enriches people’s lives.”

A yogini for more than 30 years, she is trained in many yogic, holistic and psycho-spiritual modalities, she said. Brier spoke of her ideals in 2013 at TEDxCapeMay in a presentation titled “Be Yourself, No Matter What They Say.” She’s also been featured on CBS Sunday Morning and National Public Radio.

“Being with reality is to face the challenges of life and remember the beauty of it as well,” she said. “So my job as a rabbi is helping people put into spotlight that beauty and also help people in dealing with their challenges, suffering and pain. For me, inspiring and helping is really important to the job.”

Brier said the Temple Judea community welcomed her with open arms, and she’s grateful for the openness of its members to hear out new ideas, as the rabbi brings “a little bit of a different flavor to the congregation.”

“The nicest people, well- meaning, very welcoming people,” Brier said. “They are open and desiring to learn, and you can’t ask for much more.”

Rabbi Shai Cherry made a career for himself in the world of academia. But since July, he’s been at Congregation Adath Jeshurun, where he replaced Rabbi Barry Kenter, who served as interim rabbi for the past year.

Cherry grew up in San Mateo, California, and most recently worked as a professor at the University of San Diego. He made the decision to move across the continent to pursue the pulpit for a change of pace and new scenery.

“I see my role as a Jewish educator,” Cherry said. “I’m looking to honor the members’ desires to be empowered and shape their own Jewish lives. And to the degree that people want to enhance the Jewish content of their lives, I’m here to provide that enrichment.”

Cherry began his career as a Jewish educator in 1988 after coming home from a year of volunteer work in Israel. He earned his bachelor’s in philosophy, politics and economics from Claremont McKenna College and later completed a doctorate in Jewish thought and theology at Brandeis University in 2001. His dissertation was on Jewish responses to Darwinism.

Cherry went on to serve for four years as a Mellon Assistant Professor of Jewish Thought at Vanderbilt University in Tennessee. In 2009, he was ordained at the Ziegler School of Rabbinic Studies at the American Jewish University in California.

Cherry’s research focuses on biblical interpretation and the nexus between science and Judaism. In 2007, Cherry wrote his first book, Torah Through Time: Understanding Bible Commentary from the Rabbinic Period to Modern Times. The textbook serves as a user-friendly guide to Jewish biblical commentary. His next book, Coherent Judaism, is expected to be published sometime next year.

The rabbi said he decided to come to the Elkins Park congregation because of the type of community its members have developed.

“I was attracted to AJ because they had recently undergone an extensive evaluation of what their members wanted and were willing to contribute. So this is a relatively decentralized synagogue where the membership drives the vision, and that was attractive to me,” he said. “I’ve been impressed by how thoughtful the members have been about integrating me into the community and providing me with the best possible launching pad to be successful in this community.”

Rabbi Alanna Sklover was drawn to the rabbinate starting in her senior year of high school. At one time, she considered a career as a teacher, therapist or social worker, but the sense of community-building and tradition that Judaism is steeped in attracted her to a career as a rabbi. She started at Or Hadash, A Reconstructionist Congregation, in August. She replaced Joshua Waxman, president of the Board of Rabbis of Greater Philadelphia, who was at Or Hadash for 15 years.

Sklover comes to the Fort Washington congregation from the Germantown Jewish Centre, where she worked since 2013 as director of lifelong learning.

“I’m excited to be joining the really wonderful community at Or Hadash,” Sklover said. “I’ve been struck by how warm and welcoming this community is and how every member, whether they’ve been a part of Or Hadash for 35, 36 years since its founding or just a couple of years, seems to reflect that what keeps them there is a sense of feeling at home, and that’s something my family and I have experienced since we joined the community.”

Sklover attended Reconstructionist Rabbinical College in Wyncote, where she received her rabbinic ordination with a specialization in the congregational rabbinate in 2013. She has a bachelor’s degree in theater and religion from Goucher College and studied at Hebrew University of Jerusalem and the Conservative Yeshiva.

The rabbi joins the congregation with her wife, Rebecca, and their 2-year-old daughter, Bina. As a member of the LGBTQ community, Sklover was profiled by the Philadelphia Gay News in July.

Sklover said one of her passions is encouraging people to express Jewish culture in their own way, which is why she’s interested in innovation.

“For me, it’s all about Jewish community and about a Judaism that feels both relevant and resonate. When our traditions feel old and musty, and our traditions feel like things we are following because someone once told us to or because that’s the way my grandparents did it, yes, they have meaning, but they don’t have the same kind of contemporary resonance,” she said. “For me, it’s about a Judaism that feels authentic and feels deeply grounded and rooted in tradition in our history and lineage, but that also fits and is in line with both our values and the rhythm in which we live our lives as contemporary folk.” 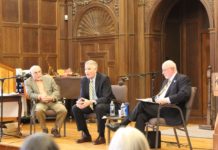 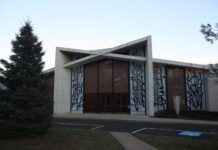