Alexander Rothman, 36, is used to playing in the margins. The co-founder, editor-in-chief and publisher of a small press called Ink Brick is a devotee of what he describes as “comics poetry,” a melding of two artistic forms that he believes have more in common than you think.

The West Chester native attended the famously tiny Deep Springs College before transferring to Harvard University and is now pursuing a graduate degree in social work at Bryn Mawr College. Rothman, who creates comics poetry as well, spoke about comics, poetry and what he takes from Judaism in his work.

It’s not easy to have a super direct and simple summary. The one that I like the best is, I think of poetry basically as the art form that is most purely made of language. An example I often give is that a novelist more or less has to deal with a plot, an essayist has to have an argument and most playwrights have to deal with characters or dialogue.

A poet can deal with any of those things, but doesn’t have to. They can just kind of play around with language, mess around in language’s toolbox. So I think of poetry that way, and I think of comics as an art form that uses images the way other forms of writing use language. So I’m kind of most interested in taking that language-like visual quality of comics and turning that toward the kind of writing that poetry can be.

Did interest in one of those follow the other, or did you get interested in both around the same time?

My interest in comics probably predates my interest in poetry. I grew up really into superhero comics and stuff, and my dad had read comics as a little kid and introduced me to things like Pogo Possum, old Mad comics, stuff like that.

Then, I really got interested in poetry in high school, college. Ended up studying poetry in college, and my undergraduate thesis was a collection of poems.

Even at that time, I knew that I wanted to think about combining the two; it just seemed natural to me. I almost double-majored in art and English, but I was a transfer student, and it would’ve been a little too difficult to do.

But! They are — it’s hard to do that (laughs). And personally, my brain works more in terms of language than it does visually, so I probably am starting a little bit more with the language side of things. But it’s just tremendously exciting. … There’s just so much possibility, and so many weird, idiosyncratic directions that people can go.

I do. I don’t feel like I know my Judaism as much as I want to; I didn’t mention earlier, but I was sort of raised Quaker, too, I went to a Quaker school for 14 years. And in my ideal life I would probably belong to a Quaker meeting and a synagogue. My wife is Jewish. … We’ve talked about joining the Reconstructionist synagogue here and one day I think we will but we haven’t yet.

It’s a part of myself that I feel hesitant to talk about with much authority or ownership because largely it’s something I need to explore more than I have, but I think the part of Judaism that I know I love the most is how alive and interpretive the religion is, with things like midrash, or Jacob wrestling a representation of the religion. That kind of feeling, like, the generative material that I’m working with; images, languages, that it’s there for me to just kind of dive into and explore and experience the mysteries of. I think of that as having a direct connection. 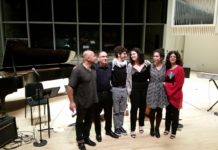 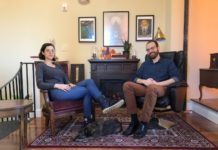 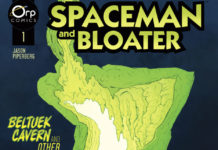