Mark your calendars, because it’s time for the Philadelphia Fringe Festival, which features several productions put on by members of the local Jewish community.

The annual 17-day event returns with more than 1,000 curated and independently produced performances held throughout Philadelphia between Sept. 4-22.

Here’s a rundown of a few:

The #MeToo movement brought the topic of consent into the public conversation. Actually by Anna Ziegler expands upon that discussion by exploring consent in regards to gender, race politics, peer pressure and our desire to fit in.

The Philadelphia-based Half Key Theatre Company will perform a rendition of the play in this year’s Fringe Festival. The show has Michaela Shuchman in the role of Amber, a Jewish freshmen at Princeton University. The story follows her night with Tom, an African-American freshman played by Dana Orange. The two agree on a night of drinking and attraction, but not on how or whether consent was given.

Shuchman is also the play’s producer. She came across the piece about a year ago and said it was memorable given the current social climate. The characters speak directly to the audience, bringing them into the conversation.

“The two actors are talking to audience the whole time. We’re asking you questions. We’re asking you to help us figure this out, and for me personally, that’s the most exciting theater when as an audience member you feel that I have a stake in this, a say in this and what I think matters as well,” Shuchman said. “The story we are telling is different. We’re not screaming at the audience what we think our viewpoints are. It’s really inviting a wide range of people into it. It really is a story that goes over all the generations.”

Director Tori Mittelman, who along with Shuchman is Jewish, said the play explores gender and race dynamics. It takes a magnifying glass to how the media can portray black men as aggressors and aims to start a conversation on the topic while presented as a causal talk with good friends.

“(The play’s for) anyone who’s ever felt like they’ve been silenced, which is pretty much every single human being on the planet,” Mittelman said. “This is giving a platform for marginalized people who have been silenced and to be able to help facilitate that conversation.”

Billy the Bully Goat can’t seem to stop picking on the other classmates, no matter what his parents or teachers do. Luckily, the Wise Old Goat, a certified goat therapist, is there to help. This musical is based on the children’s book of the same name by Jewish author Staci Schwartz. She is a member of Society Hill Synagogue, a physician and an educational consultant for children’s bullying prevention in Philadelphia.

Schwartz has performed interactive readings and bully prevention workshops for the past 15 years. But while she was able to speak to kids and teachers about bullying, she said there was a third piece of the puzzle missing from the conversation — parents. So for the past six years, Schwartz has worked on turning her book into a musical to reach a wider audience.

The script and lyrics were written by Schwartz herself while the original music was composed by Liz Filios, a Barrymore Award-winning actor and musician. Ben Smallen serves as the production’s director with music directed by Michael Borton, co-writer and composer of The Berenstain Bears LIVE! in Family Matters the Musical.

“This is a total labor of love. It is an absolute dream come true to see it come to life,” Schwartz said. “When I first began this quest, I thought this might end up being like a community theater production, but it is so far beyond that, like children’s theater that I’ve seen in New York. Its live energy, bubbly, funny. … This has turned out better than I can even imagine. My director has such vision, and my actors, crew and cast are so talented.”

The show aims to start a conversation about bullying while being fun for the whole family. Schwartz said much of the story’s theme of kindness, acceptance and treating others not just how you want to be treated, but even better, comes from core Jewish values.

“It has really positive messages (and) encourages great conversations among kids and adults, in addition to a wonderful entertaining time and watching some young, talented actors just command this performance,” Schwartz said.

Tribe 12 returns for its second year at Fringe Festival to present a Jewish rendition of an ‘80s classic. Filmmaker John Hughes’ The Breakfast Club has been reinterpreted for the stage as The Break Fast Club, with the characters reframed in a modern Jewish context.

The movie tells the story of five high school students stuck in detention. Each comes from a different walk of life, embodying common tropes such as the rebel, the princess, the outcast, the nerd and the jock. In the play, these characters have been changed to better fit common Jewish tropes. Engagement Associate Ross Weisman said it’s the same script, just with more Jewish puns and references.

“We thought this was a cool opportunity to bring Tribe 12 and our constituents to a much different style of event than we usually do,” Weisman said. “We specialize in happy hours, social gatherings, and so having dedicated members of our community put on a show is an exciting change of pace.”

One of the show’s actors is Elijah Tomaszewski. He’ll be playing the character Brian Johnson, now renamed Brian Goldstein. He’s been involved with Tribe 12 for about a year and jumped at the chance to do theater again like he did in middle and high school.

“It’s been a pretty fun time,” Tomaszewski said. “Everyone should come and see it. It’s not every day you get to see a Jewish parody of The Breakfast Club.”

Last year Tribe 12 participated in the festival for the first time with its comedy, Sage Wisdom, set in olden times telling the story of villagers seeking the wisdom of local rabbis. Weisman said this show will be a nostalgic trip for any ’80s pop culture fan. A comedian will open the show. Tickets are $15. Performances will be held at 7 p.m. on Sept. 11 and 12 at the Philadelphia Ethical Society.

“It’s community theater, so it has that local vibe to it,” Weisman said. “If you are a fan of ‘80s pop culture and you want to have a good laugh right before the Jewish High Holidays, then this should be a really fun time.”

If you love the hit musical Les Misérables, then Eric Jaffe said you’ll love his parody Gay Mis just as much. And if you hate Les Miserables, Jaffe said then you’ll love Gay Mis even more.

Jaffe, who was named Drag Queen of the Year at this year’s Philadelphia Drag Awards, has worked on a queer adaptation since February. His goal was to create a show for queer actors who didn’t fit into to the mold of conventional theater. Many in the 15 member cast are queer, trans and nonbinary. Jaffe’s second goal was to help make sense of the original.

“I never really understood Les Misérables the first couple of times that I saw it. Les Misérables is very confusing to a lot of people, especially when it’s done in high schools and summer camps, which it often is. And I sort of drive into the fact that the story is so convoluted, and I basically parried everything that you could think of about the show,” Jaffe said. “It’s very silly, it’s very over the top, very ridiculous, all things that I love to be.”

Instead of the protagonist Jean Valjean thrown in jail for 20 years for stealing a loaf of bread while living in 18th- century France, the character Parmesan is put away for eating bread while on the keto diet. His arch-nemesis Javert, now Jabear, played by “a big burly bear,” is chasing after him not only to arrest him, but now because he’s also in love. This version has some Jewish humor thrown in as well. Instead of the protagonist seeking refuge in priest’s house, this version has him meeting a rabbi named Tevye.

This will be Jaffe’s second production after his first parody, Thweeney Todd: The Flaming Barber of Fleek Street, which premiered in January. Much of the cast from that production carries over into Gay Mis. Jaffe said Thweeney Todd sold out its first run and plans for it to make a return this October. As for Gay Mis, dates for the performance will be at 7 p.m. on Sept. 7, 8, 14 and 15 at Franky Bradley’s with additional 10 p.m. shows on Sept. 8 and 15. A final performance will be held at 7 p.m. on Sept. 22 at Punch Line Philly. Tickets are $25.

“There’s so much talent and so much beautiful, queer essence in this show, and the cast is beyond anything I could have ever asked for,” Jaffe said. “The show’s hilarious, it’s one of the funniest things I think will be in the Fringe Festival this year.”

You Only Shoot the Ones You Love

Stephen Colbert, Dan Aykroyd, Steve Carell, Keegan-Michael Key and Tina Fey are just a few of the many comedy legends who are alumni of The Second City improv-comedy troupe that dates to 1959.

It’s a history Jeffrey Sweet is all too familiar with. He got the chance to meet many of Second City’s earliest stars when writing his 2004 book Something Wonderful Right Away: An Oral History of the Second City and the Compass Players. Now his new one-man show retells his interactions with these kings and queens of comedy.

“It’s like the mafia of comedy, and my show is about how I happened to stumble into that community,” Sweet said. “I’ve just been in the scene for a long time, had a lot of fun and hope the show conveys some of the fun I’ve had.”

Sweet is a playwright and theatre historian. He’s authored numerous stage productions along with two books teaching playwriting. In his one-man-show, Sweet talks about the early history of Second City along with its Jewish connection. He said a majority of the troupe’s founding members were either the children or grandchildren of Jews who fled anti-Semitism in Russia.

Sweet theorizes many saw the irony in their family’s history of fleeing persecution, only to end up being scrutinized under McCarthyism. It’s a shared story Sweet can claim heritage to, being Jewish himself.

“My theory is the satire explosion in this country started in the 1950s when the McCarthy era got started. They looked and said, ‘Oh, this is a new kind of Cossack,’ they’re wearing ties and they don’t have horses, but they’re still Cossacks,” Sweet said. “There’s a direct line from my grandmother escaping from Poltava to Saturday Night Live.”

Sweet said anyone interested in contemporary satire, Jewish American culture or comedy throughout the past 50 years will appreciate his show. A knowledge of those topics beforehand isn’t required, although general knowledge of historic events helps.

“I mention Hitler in passing; it’s kind of nice if you know him,” Sweet said.

You Only Shoot the Ones You Love was recently performed at the New York Fringe Festival.

“The New York Times liked it; that means it must be good,” Sweet said. 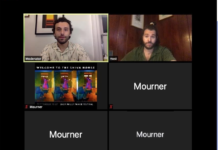 Playwrights Place Shiva in the Spotlight for Philly Fringe Fest