In 2019 America, everything is political … except Etta Winigrad’s artwork.

The Jewish sculptor transcends the zeitgeist with timeless themes like the search for meaning and the universality of the human experience.

At 83, Winigrad is no longer producing original work. But in these intense political times, her sculptures are still reminding people that we aren’t alone, and that we are all alike in some essential, distinctly human ways.

Her message is especially timely these days, so even though Winigrad is retired, her life’s work is breaking through like never before.

The lifelong Philadelphian, who was born and raised in the city’s Wynnefield section, studied art at the University of Pennsylvania and raised her family in Camden and Cherry Hill, will see two exhibitions of her work sprout up in the region this fall.

Both exhibits will showcase a wide range of Winigrad’s sculptures, from small masks to torsos without arms to dreamscapes. They all capture universal themes.

Thomas Scurto-Davis, the executive director of the Main Line Art Center, first encountered Winigrad’s work in 2010 when he started working at the Haverford gallery. Main Line was hosting a show, and Winigrad had a piece on display. It was a bust of a human face, but you couldn’t tell if it was male or female. Yet the features on the face, the eyes, the nose, the mouth, the lines, all stood out to Scurto-Davis — so much so that he found himself staring at the face for minutes on end. The face appeared to be deep in thought, and occasioned some deep thoughts in Scurto-Davis’ mind.

“I was in my early 40s and thinking about my purpose,” he said. “What will I accomplish and what’s the point of that?”

Scurto-Davis felt that with this face, Winigrad was demonstrating that all humans go through similar periods of self-reflection. It made him feel less alone.

“There was this sense of security I got from knowing other people were struggling with this too,” Scurto-Davis said. “There was this comfort in the sense of the collective.”

Scurto-Davis was the finance director of Main Line at the time, and his deep reflection on that 2010 day helped clarify what he wanted to do moving forward: Help others realize they are not alone.

Almost a decade later, Scurto-Davis is running Main Line and devoting nearly a full season to the artist who helped him find his purpose.

“Her work captures the human condition,” he said.

“It’s always an exploration of the human condition,” David Winigrad said. “So there’s a Jewish soul.”

Perhaps Winigrad is so good at capturing the human experience because she has lived a full life of her own. The octogenarian is not just a locally famous sculptor. She was also a wife to her late husband, Allen, and a mother to their four sons, David, Michael, Jacob and Daniel.

And David Winigrad said that, when the brothers were growing up, as much as Etta Winigrad was a great artist, she was also a classic Jewish mother.

“Very involved,” David Winigrad said. “She was always taking us to the swim club and Hebrew school and Bar Mitzvah lessons — while also inventing these fantastic sculptures. It was a rich existence.”

And it’s one that deserves to be celebrated by the arts community this fall.

“This will be a testament to her legacy,” David Winigrad said. 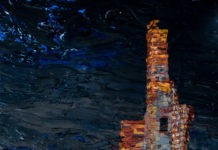