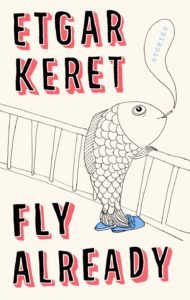 Etgar Keret Is a Gift

Etgar Keret is not the kind of writer that people like.

He does not write novels, which have always sold better and to a wider audience than short story collections do, and his characters are seldom heroic, or generous, or capable of maintaining generally enviable inner lives. Most of the time, his characters are low-level liars and cowards, bungling their romances and their relationships with their children, getting fired or crying, arguing about marginalia and having forgettable sex.

But they yearn, always, very deeply, for connection and for love. The father in “To The Moon And Back” vows to buy his son the store’s cash register after promising he would get him whatever he wanted for his birthday; the unnamed protagonist of “Chips” cannot stop thanking the woman who takes his virginity, for reasons even he can’t quite understand.

It is for those reasons that Etgar Keret is not the kind of writer that people like, but he is certainly the kind that they love. His newest collection, Fly Already, out in September, has already won all manner of awards and praise, and there is a reason for that: It is unbelievable.

The writer he is most often compared to is George Saunders, and Fly Already is a good illustration of what distinguishes the two of them from other writers, and from one another.

Like Saunders, Keret often likes to write stories of no more than a few pages, inviting immediate rereads. The title story, “Fly Already,” about a miscommunication between a man on a ledge and a man begging him not to jump, is a scant six pages. And yet, to reach the end is to feel compelled at once to search back through story, to try and figure out what, exactly, Keret is telling you.

But he often makes a mockery of interpretation. “Tabula Rasa,” which begins as a Saunders-esque miniature-horror story about technology of the not-too-distant future, turns into something horrifying and hilarious and unforeseeable about the Holocaust and memory.

The protagonist, A., sees symbols everywhere he goes, and struggles to make out what they mean; by the time his story crescendos, you see that you’ve been led to believe that you can outsmart Keret and A., and that you’ll figure out what’s going on before the end. You’d be wrong.