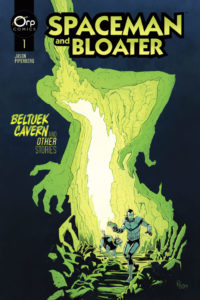 To Infinity and Beyond

Spaceman and Bloater: Beltuek Cavern and Other Stories

Prepare to blast off with this graphic novel published this spring. Spaceman and Bloater: Beltuek Cavern and Other Stories is a cute, light-hearted, fun sci-fi adventure intended for a younger audience.

The story was entirely written, illustrated and lettered by one man, Jason Piperberg, a Jewish comic artist in Lancaster. His portfolio includes covers for Archie Comics’ Sonic and Mega Man books. This indie project is Piperberg’s love letter to the genre.

The story follows the adventures of Spaceman, a Buzz Lightyear-looking alien, and his three-eyed acid-spewing dog Bloater. The two are intergalactic couriers. They travel throughout space on The Saritorian to deliver packages too dangerous or too strange for anyone else to take on. The modernized ray-gun gothic art-style depicts the characters in a variety of shots and angles to make the story feel action packed and eventful.

There are five stories collected into this volume, which is 56 pages in full color. The first, “Beltuek Cavern,” is a 19-page story made exclusively for the book. The rest (“The Orb Of Raahg,” “Stranded For The Holidays,” “Klick Klack” and “Cocoon”) are all shorter comics previously released between 2012 and 2014 that have been touched up for this edition. The art of the newer comics is noticeably higher in quality, but it doesn’t detract from the narrative.

Each issue is a self-contained story. You’ll follow the duo on their adventures encountering spooky specters, fighting ice giants and playing Ping-Pong against villainous rivals.

The comic is light on text. There isn’t much in terms of long dialogue or wordy conversations. It’s primarily action focused. The reader is told just enough to get the story going, making each vignette a simple read and easy to pick up.

The book ends with a behind-the-scenes section with sketches and character design sheets. It’s a nice touch for any kid interested in drawing comics of their own.

It was fascinating to learn the author made a 3D model of the spaceship to use as a reference point for drawing it from different angles.