An overflow of support from local Jewish organizations and community members is enabling the Chevra Social Club of Philadelphia to rebuild after a fire reduced the interior of its venue to rubble and ashes.

Those resources and emotional support also are allowing Chevra to successfully continue operations.

Chevra’s venue featured a theater, art gallery, cinema, lounge and bar serving a Jewish “community of friends,” mostly in their 20s and 30s. A few thousand participants in the Philadelphia area are affiliated with the organization. Chevra’s programs focus on Jewish social artistic, educational, spiritual and volunteer experiences.

But fire engulfed 2002 Ludlow St. on Feb. 20 after an underground transformer exploded near the corner of 20th and Ranstead streets in Center City.

Damages are estimated at close to $1 million, the organization reported.

Chevra CFO and Vice President Leon Vinokur is leading the restoration project. A former attorney specializing in commercial real estate and zoning law, he has been part of Chevra’s leadership since 2004.

“Our mantra since the fire is resiliency and the ability to adapt,” he said. “We had a responsibility to the community and our constituency to keep going.”

The National Museum of American Jewish History, the Jewish Federation of Greater Philadelphia and other Jewish organizations immediately contacted Chevra after the fire, offering support.

“Our participant leaders, staff and volunteers rallied together so we could maintain our programs through the restoration process,” Vinokur said.

Vinokur was scrambling to find an alternate venue for Chevra’s annual Purim party in March, one of its biggest events of the year when NMAJH offered to host the event.

“We used the ballroom at the museum; it was perfect and saved the day,” he said.

NMAJH Director of Development Cobi Weisseich said the opportunity to collaborate on projects has been exciting and successful for the community.

“We had not planned on a Purim party this year, and when Chevra had a need, we were able to contribute and create an even stronger event,” Weisseich said.

“We offered a space for the class, even keeping the museum open beyond regular hours,” Weisseich said. “It is important for them to have continuity in their program.”

Jon Erlbaum, executive director of Chevra, continued to run the Philly-Israel Fellowship and the Encore Israel programs successfully from March to mid-July.

Encore, also partially funded by Jewish Federation, is a similar weekly program, with a greater emphasis on Jewish education. Participants in both programs can join the Chevra Israel trip.

Remi Schmidt, 26, a speech language pathologist from Ardmore, participated in the Encore program.

“I met my husband on a PIF trip to Israel in 2014, so I am enthusiastic about Chevra,” she said. “I attended the Encore classes at the Jewish museum this spring, which included in-depth studies with rabbis.”

Schmidt and other participants studied at Shearim, a women’s yeshiva in Jerusalem, during the trip.

Chevra is hoping to have its venue restored by Chanukah.

Vinokur has spent scores of hours touring the charred building with insurance adjusters. He and other staff members visit the site multiple times per week to oversee the process.

“The reconstruction effort is a daily undertaking,” Vinokur said. “Our public adjuster … is helping us navigate the process.”

The rebuilding started in May. Each phase must be negotiated and approved by the city and the insurance company.

The first phase — structural repairs and restoring electrical service to the building — is complete. The second phase, demolition, which removes the damaged parts of the structure and interior, is underway.

Chevra took power directly from the transformer that exploded. It went through the line and into Chevra’s building. The force of the explosion caused the water supply pipe to crack, flooding the basements, Vinokur explained.

“PECO suspects it may have been a gas explosion that caused the fire,” he said. “PGW said it was not an underground gas leak; it was PECO’s faulty equipment.”

The insurance company, PECO and PGW are still investigating, he said. 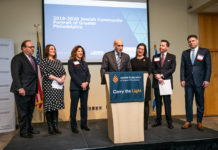 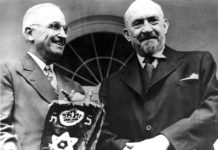