Given that I’m a Republican, you’d think I’d be supportive of the federal government’s decision to reinstate capital punishment.

Back in the early 1990s, I worked as a general assignment reporter and a Capitol Bureau reporter for the Arkansas Democrat-Gazette. The paper didn’t specifically assign someone to cover the state’s prisons, so I carved out a partial beat covering the punishment part of crime and punishment.

That included covering Arkansas’ death row and the execution status of inmates. The state had resumed executions in 1990 after a hiatus dating to 1964.

My reporting included a lengthy story about what life was like on death row. I interviewed four inmates, including one several times.

In 1992, there were two executions that led me to ultimately believe capital punishment was wrong, as did the inmate interviews.

The first execution was of Ricky Ray Rector, who had killed a man and wounded two others in a dispute at a restaurant in 1981. A couple days later, a negotiated surrender went astray and Rector shot and killed a police officer.

Rector then turned the gun on himself. He survived, but essentially gave himself a lobotomy. At his trial — and in subsequent appeals — his attorneys argued unsuccessfully that he wasn’t competent to stand trial. The death row inmates I interviewed confirmed that Rector was child-like and “scared of his own shadow.”

There’s even a story you can still find on the internet that Rector set aside the pecan pie in his last meal so he could eat it after the execution. A prison official I trusted told me it wasn’t true, but the point seems clear that Rector was incompetent.

To complicate matters, Rector’s lethal injection was botched. During his years in prison, Rector had become obese. When it came time to find a vein, the execution team took more than 45 minutes of poking and prodding before the execution began. Witnesses, who were shielded by a curtain, reported hearing Rector groaning.

A few months later, I was one of two media pool reporters serving as an official witness to the execution of Stephen Douglas Hill.

When he was just 18, Hill and a fellow inmate escaped from a work detail in 1984. They came to a home, tied up its residents, stole weapons and a truck before leaving for another house. Police soon surrounded and captured them, but not before an investigator was shot and killed.

Hill confessed on videotape (although his accomplice later claimed that he had pulled the trigger, not Hill). Hill received a death sentence, while his co-conspirator, who kept changing his story, got 86 years.

During appeals, attorneys noted that the slightly built and frail Hill said he escaped because he was repeatedly raped by other inmates and fearful for his life.

Unlike with Rector, Hill’s execution went smoothly. When the viewing room curtains were parted, Hill was strapped down on a gurney; it looked as if he was prepped for surgery, an IV line in his arm. After the warden read the death proclamation, Hill mumbled his final words, apologizing to the trooper’s family, members of whom were in the viewing room.

The execution began, as the unseen executioner opened a valve that sent a three-drug cocktail into Hill’s veins. About a minute later, Hill’s face grew ashen and his body lurched slightly against the restraints before coming back to rest. He was pronounced dead six minutes later.

Driving home that night, I didn’t feel like the world was a safer or better place, and Hill’s death didn’t seem to provide a whole lot of comfort to the dead police officer’s family.

But what really cemented my opposition to the death penalty was something each of the four death row inmates interviewed said. All of them were motivated by the belief (no matter how unlikely) that they could get off death row — or even out of prison entirely.

So I asked them what they would prefer if they knew there was no chance they could ever get out of prison: a life sentence or the death penalty? All of them chose execution.

That signifies that a life sentence is actually the better punishment, not an easy way out. Let them think about what they’ve done for years upon years.

Don’t get me wrong: Rector’s diminished capacity and Hill’s physical liabilities aside, they were bad guys who deserved harsh punishment. So were the four inmates I interviewed. Of the four, one later was executed, one died of a heart attack while still in prison and the other two are now off death row, but serving life sentences.

None of them deserved to see the light of day.

In addition, by eliminating the death penalty, you eliminate the chance of executing an innocent person (yes, it happens). And you even save money. Back in the 1990s, there was an often-cited figure that housing an inmate for the rest of his/her life cost about $800,000, compared to more than the $3 million it took in legal and other expenses before a prisoner was executed. Today, studies show, the cost discrepancy remains.

Finally, shouldn’t we be better than our murderers?

Yes, there are Talmudic references to capital and corporal punishments, but interpretations have changed (and softened) over the years. The “eye for an eye” mentality is better left in movies like Death Wish and Dirty Harry than in an enlightened society.

Letters | The Death Penalty and the Palestine Mandate 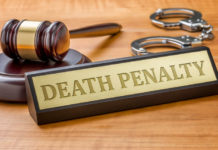