By Adam Reinherz and Eric Schucht

Rabbis across Pennsylvania are concerned at both spiritual and Talmudic levels about the ramifications entailed in the resumption of capital punishment at the federal level.

Rabbis were interviewed by the Jewish Exponent and the Pittsburgh Jewish Chronicle in the wake of the Department of Justice’s announcement last week that it will resume executing federal death row inmates after a nearly two-decade-long lapse.

The decision follows direction from U.S. Attorney General William Barr to the Federal Bureau of Prisons to adopt an addendum replacing a three-drug procedure previously used in federal executions with a single drug — pentobarbital — and to schedule the killings of five prisoners found guilty of murder.

“Congress has expressly authorized the death penalty through legislation adopted by the people’s representatives in both houses of Congress and signed by the president,” Barr said in a statement. “Under administrations of both parties, the Department of Justice has sought the death penalty against the worst criminals, including these five murderers, each of whom was convicted by a jury of his peers after a full and fair proceeding. The Justice Department upholds the rule of law — and we owe it to the victims and their families to carry forward the sentence imposed by our justice system.”

When asked about the Jewish perspective on capital punishment, several local rabbis referenced Tractate Sanhedrin of the Mishnah: “A Sanhedrin that puts a man to death once in seven years is called a murderous one. Rabbi Eliezer ben Azariah says, ‘Or even once in 70 years.’ Rabbi Tarfon and Rabbi Akiba said, ‘If we had been in the Sanhedrin, no death sentence would ever have been passed’; Rabban Simeon ben Gamaliel said: ‘If so, they would have multiplied murderers in Israel.’”

Rabbi Albert Gabbai of Congregation Mikveh Israel in Philadelphia said the burden of proof is so high that Jews have an obligation to ask to be excused from jury duty in cases when a death sentence is a potential verdict.

“Judaism does not believe in circumstantial evidence for capital punishment — it’s based on two eyewitness and due process,” he said. “If due process is not followed heavily, then they cannot convict.”

Rabbi Levi Langer, dean of Kollel Jewish Learning Center in Pittsburgh, agreed, noting that the Talmud teaches “you need a clear eyewitness account, that it wasn’t contradicted by any other eyewitnesses, it has to go through a lengthy cross-examination on the part of all the judges and they have to determine if they can find any reason to question the account. Only after the whole process would they administer this penalty, and the Talmud stresses that it would be expected to be very rare.”

“You could not have a trial at night,” said Rabbi Sara Rae Perman, rabbi emerita of Congregation Emanu-El Israel in Greensburg, Pennsylvania. “It had to take place at daytime because you needed real light to expose any evidence you have. … They didn’t have electricity. They had oil lamps, and they are smoky and don’t always cast a broad view of the light. Everyone can’t see the same things.”

Gorban said the reluctance to actually enforce the death penalty “is fascinating to me because even though there is a command to punish someone who has committed a capital crime with the death penalty, the rabbis are so uncomfortable with doing that.”

Rabbi Julie Greenberg of Congregation Leyv Ha-Ir said the death penalty runs counter to all rabbinic traditions. While capital punishment is outlined in biblical text, Greenberg said, it has not been performed in the Jewish tradition since the destruction of the Second Temple. The punishment under Jewish law, she said, was designed to be so difficult that implementing it would be virtually impossible.

Last month, Greenberg joined Philadelphia District Attorney Larry Krasner at a press conference, where he announced he was filing a brief requesting that the Pennsylvania Supreme Court find the death penalty unconstitutional.

As human beings, “we are fallible,” said Gorban. The early rabbis “put as many bounds around actually sentencing someone to death as they possibly can because they don’t want to accidentally kill someone who is innocent, or particularly innocent of the crime that would require the death penalty.”

Since its 1992, the Innocence Project has used DNA testing to clear the wrongly convicted, resulting in 365 exonerations, including 20 for people who’d been on death row.

Rabbi Abe Friedman of Temple Beth Zion-Beth Israel in Philadelphia said the possibility of innocence brings an urgency to the matter.

“This is something that is dangerous,” Friedman said. “With every other piece of the justice system, if there were an error, there’s a means of reckoning with that and setting things right. But an execution is permanent, and I’m very uncomfortable with the notion that we would think any human court would think it’s so infallible to do something so permanent.”

Adam Reinherz is a staff writer for the Pittsburgh Jewish Chronicle, a Jewish Exponent-affiliated publication.

Letters | The Death Penalty and the Palestine Mandate 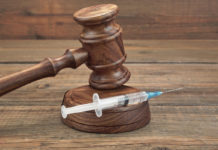