When Polly Edelstein was a graduate theater student at Villanova University, she wrote a manifesto.

The concept of a “manifesto” has taken on some ominous connotations over the years, but rest assured, Edelstein’s wasn’t malicious; in fact, her manifesto was an assignment from a professor. The assignment asked her to write “what sucks about theater, why, and what you’re going to do to change it,” Edelstein recalled.

“Everyone should write a manifesto once in their life,” she said. “Probably more than once.”

Edelstein, the fellowship coordinator of Tribe 12, wrote about the lack of parity for women in theater. That part was easy, as it had been on her mind for a while. The next part — doing something about it — was the hard part. After graduation, she and some fellow graduates of her program, all similarly interested in work that empowered women, came up with an idea.

The result — the Philadelphia Women’s Theatre Festival, now in its fifth year — has turned out to be worth the work. The festival will be held this year at the Arden Theatre’s Hamilton Family Arts Center from Aug. 1-4, and will feature staged readings of new work, all by women. (There will be several plays for children, too.) Admission is pay-what-you-can, with a suggested donation of $10, and no one is turned away.

The festival has come a long way from a germ of an idea in November 2014. That first year, Edelstein said, was one wherein she had “a lot of vision” without much of the know-how needed to put together a festival. The final product was two staged readings and one full production at the Asian Arts Initiative at 12th and Vine streets. Though she was pleased with the result, the planning was, well …

“In a lot of ways, it was awful, because starting something is awful,” she said with a laugh.

Today, the festival receives close to 150 submissions for production, beginning in December. Over the next eight months, Edelstein and others, along with apprentices, sort through submissions, identify the ones of the highest quality that also hew to the theme of the coming year’s festival (this year — Philadelphia), and work with the playwrights to shepherd the show to the stage.

Throughout the year, Edelstein and other organizers put together panels and professional development sessions for women, on subjects like, say, how to get your show produced at a professional level.

One of the most important aspects for Edelstein is that each of the selected playwrights are paid for their work.

“There’s a lot of opportunity in theater if you’re willing to not be paid for your work,” Edelstein notes, which creates a barrier for low-income women. The artists, she said, are paid before the organizers, often leaving the latter unpaid at the end. But given what she’s able to do — partner with organizations like Woman Organized Against Rape and Parent-Artist Advocacy League, and uplift women in the theater world one festival at a time — the work is often its own reward.

“To be able to do this kind of work is not easy but is very necessary,” Edelstein said. “We’re glad to be a part of that.”

Doriane Feinstein is one of the women being “lifted” by the festival this year.

Feinstein’s play, Zachary Hates Everything, is special to her for a few reasons. First, it was written between (and on) shifts working at Six Flags Great Adventure, an experience that assuredly contributed to the play’s mood and title. But it’s also her first professional production, and for the 22-year-old Feinstein, it’s all “very exciting.”

“Hearing that there’s a space in Philly, for women, for their theater to be somewhere, in this world that’s often male dominated, it was really great to know that it existed, and it just became a really important opportunity,” she said.

Feinstein met Edelstein through Tribe 12, and Edelstein encouraged her to submit. Though she wasn’t sure yet if she was ready for that step, she’s glad now that Edelstein was so persistent. She was thrilled with the assistance she received from Edelstein and the organizers in identifying actors, a dramaturg and a director that worked for her show.

“Whether or not the script is done, whether or not I continue with this project, the process has shaped me into a better writer,” Feinstein said. 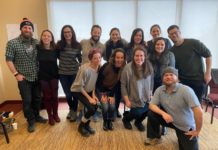