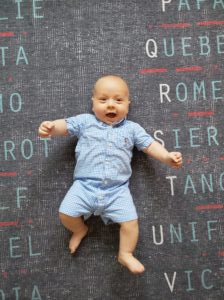 Sid is named in loving memory of his maternal great-grandfather Joseph Davis.