Rabbi Barry Kenter led the Greenburgh Hebrew Center in Dobbs Ferry, New York, for 31 years. He oversaw B’nai Mitzvot, did “the teaching and the preaching,” and was present for the naming of the children of the very same folks. He tangled with the board when it came time for tangling, but most importantly, he set down roots with his family, which was always his goal. In 2015, he retired.

Or so he thought.

At the end of June, Kenter delivered his final sermon at Congregation Adath Jeshurun in Elkins Park, where he’d been the interim rabbi for close to a year. It was bittersweet, he said, but he’s used to leaving at this point. After all, AJ was his third stop as an interim rabbi for hire since his “retirement” back in 2015.

“As my older son says, ‘My father’s retired, but he’s not good at it,’” said Kenter.

How does one become a professional stopgap, steadying the ship from state to state when duty calls? Certainly, in Kenter’s case, it helps to be a accustomed to traveling.

Though Kenter was sure he was going to be a rabbi by the time he was 8 years old, he’d changed his mind before he turned 18. He “did some other things” for a while, including a turn as a Rotary International Fellow at the Catholic University of Louvain, in Belgium. When he returned to the States, he thought he’d become a teacher, and when that didn’t pan out, the rabbinate called him once again. He was ordained in 1980, and after a few years an assistant rabbi in Toronto, he was hired by the Greenburgh Hebrew Center. In 1984, he was ready to put down roots and raise his family.

There’s a happy ending to that one: He and his wife raised three children in one place, in a profession that often requires one to move their family repeatedly. “We were lucky,” he said.

Finally, he said, a combination of factors — not wanting to block a younger rabbi from an attractive post, a desire to see his grandchildren more and a determination to “leave at the top of my game” — led him to Retirement No. 1. He settled into retired life, with an eye toward signing on with Masorti Olami (an organization that works to further the interests of the worldwide Conservative movement) in France or Belgium.

But the rabbinate had other plans. Congregation Beth Israel in Greenville, South Carolina, had recently parted ways with their rabbi under acrimonious circumstances, and they were looking for an interim rabbi to come in while they searched for someone more permanent. Kenter, after hearing about the position, agreed to come down to Greenville two weeks out of the month. For a rabbi who had spent over three decades in one place, this was a big change.

Almost immediately, he noticed that the congregants seemed “somewhat beaten down, somewhat negative about themselves” in the wake of their previous rabbi’s departure. One of his first lessons: Perhaps the main function of an interim is “making a congregation feel good about themselves again,” he said.

There was much more to learn. He discovered that, as an interim, there were “none of the politics” that come with being full-time. “The major topic at synagogue board meetings is what the rabbi did wrong this week,” he said, which can cause even the best of rabbis to question whether they’re in the right place. But as an interim rabbi, he found that his transience was often a buffer against such things. “An interim job is very ego-affirming,” he said.

After a year in Greenville, he once again settled into “retirement” in Dobbs Ferry.

Then Congregation Habonim came calling. The rabbi at the Upper West Side synagogue left unexpectedly in May, and they needed an interim while they searched for a long-term solution. Was Rabbi Kenter interested?

Beginning in July, he was the full-time rabbi at Habonim, living in Manhattan. There were significant differences between the congregations of Greenville and the Upper West Side, but in the important ways, Kenter said, they were the same.

At the end of his time at Habonim, he took a year off, and experienced a bit of civilian life back at his old synagogue in Dobbs Ferry. Then opportunity knocked again: Adath Jeshurun’s rabbi had left after four years. AJ was beginning a new strategic initiative called AJ New Way Forward, part of which would entail identifying a new rabbi to lead them into the future. In the meantime, an interim was needed. Kenter signed on, and was delighted by the community he found.

He complimented the “extraordinarily Jewishly knowledgeable laity” in the community, and noted that he and his wife had been “invited to people’s homes more times in the 10 months we were at AJ than in the 31 years in Dobbs.” It is “a lovely, lovely community,” he said.

AJ, in its entire history, had never once had an interim, and the rabbis they did have often stayed for decades. Judy Izes, president of the executive committee of the synagogue, said that the synagogue needed to “do some soul-searching and looking within ourselves to find what we wanted for the future.”

“Congregants really appreciated his teaching, his warmth and his ability to seem like he’d been at AJ for a very long time,” said Izes. “He’s haimishe, and he’s warm, and he really fit in beautifully at AJ.”

Kenter and his wife are now unpacking boxes in a New Rochelle apartment after decades of living in a succession of rabbinic parsonages. As he sorts through what to keep and what to hold on to, he believes he may really be retired for real this time. In the meantime, he had one little secret to spill about the interim lifestyle: It becomes far, far easier to recycle a d’var Torah. 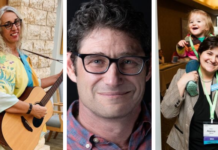