Pennsylvania recently passed its 2019-2020 budget, which includes $3.2 million for nonpublic schools — including Jewish day schools — to expand security grant resources. This represents a 597% increase from last year’s budget, according to Teach PA, a project of the Orthodox Union and an advocate for nonpublic schools.

At the same time, the new budget includes a $30 million increase — for a total of $240 million — to provide scholarships for low-to-middle-income students to attend nonpublic school.

“These tremendous gains in security, scholarship and other support for our children represent the most significant wins we’ve achieved since we began this work in the Commonwealth just six years ago,” Teach PA Director Arielle Frankston-Morris said in a press release. “We are greatly heartened and deeply appreciative that our elected leaders recognized our community’s growing needs and fought so hard and so tirelessly to make them a reality.”

Nearly 5 million American teens use tobacco, according to National Jewish Health, a health care institution that specializes in respiratory, cardiac and immune diseases. Many of those teens vape, in other words, they use an electronic cigarette or other vaping device.

To combat this trend, National Jewish Health has launched a program called “My Life, My Quit.” Beginning July 1, teenagers in nine states — Pennsylvania, Colorado, Massachusetts, Michigan, Montana, Nevada, North Dakota, Ohio and Utah — who want to quit vaping can call or text the toll-free number 1-855-891-9989 or use an online chat at mylifemyquit.com to reach a trained youth coach.

Jewish Family and Children’s Service of Greater Philadelphia has been recognized in Celebrating Everyday Change-Makers in Child Welfare, a report featuring child welfare agencies across the country that are partnering with the Human Rights Campaign Foundation’s All Children – All Families project.

The goal of the project is to promote more LGBTQ-inclusive policies and practices at child welfare agencies and recognize those that are “leading the field with innovative approaches to inclusion,” according to the HRC site.

To be included in the report, agencies had to perform a self-assessment, provide professional development to staff and implement benchmarks to track policy and practice changes.

JFCS of Greater Philadelphia was one of 32 agencies that received innovative tier recognition.

“It is truly an honor to be recognized for the high-quality of work and commitment Jewish Family & Children’s Service of Greater Philadelphia provides to the LGBTQ community,” JFCS of Greater Philadelphia President and CEO Paula Goldstein said in a press release. “Our staff is dedicated to ensuring that we actively recruit foster and adoptive parents from the LGBTQ community, and help provide a loving and caring home for a child.” 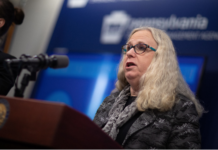