I recently went to a funeral that was real, but mostly very surreal. The world lost a truly great human being, and this loss deeply touches people all around the world. He was truly a great man, everyman’s rabbi, a loving and loyal husband, father and brother, and a genuine larger-than-life friend to thousands. What was the secret ingredient to his greatness? It was his brand of unusual, authentic and unconditional supplies and expressions of love.

What struck me about this profoundly sad gathering was not just that there were hundreds and hundreds of people who gathered from near and far, or that there was a palpable demonstration of caring affectionate embrace connecting people to share sadness, courage and comfort in every corner of this large room while simultaneously filling the individual and collective void, but that it felt as if the departed, dearly beloved man, Rabbi Mike Stern was still actually present. There was a sense of bringing light to the dark and heavy pain and I had never had this kind of experience at any other funeral. He was a larger-than-life persona who had personally and genuinely touched every single person who had a seat, and the standing-room-only people who lined the walls around the room. This was a truly great man.

I knew Mike Stern as a kid and everyone knew that if you couldn’t find him, he was probably on the nearest basketball court, smiling and making everyone feel good about their good shots and their off-target ones. He was a terrific athlete with unusually considerate sportsmanship. I knew Mike Stern as a teenager, and attended overnight camp with him where his athletic prowess was one of his hallmarks, but his real fingerprint was his steadfast kindness, pervasive jubilance and unabiding friendship. This was the indelible stamp he gently placed on everyone’s heart.

We lost touch for about two decades and reconnected in the late 1990s. What reconnected us was that we happen to be living in the same community, and my husband and I had just moved to Bala Cynwyd. We wanted to attend the village shul that he and a fellow rabbi founded in Philadelphia, Aish Philadelphia. The character of this small congregation was colored by Rabbi Stern and Barnett’s accepting, nonjudgemental natures. One of the threads that seamlessly wove our friendship back together was our respective desire to get closer to our Judaism and continue to build a more real, living relationship with God. We also sensed that we shared our individualized version of a drive to bring more love, kindness and healthy healing into the world. He did this in all his connections and conversations, with pleasure. He had an uncanny gift of lifting people up, even if it was after a quick passing on the street. He was my guiding light, mentor and everyday teacher about how to endure challenge with awe, sweetness and optimism, and a drive to keep moving forward. I knew and saw that he walked it, talked it and breathed it in to the minds and hearts of everyone he knew, and everyone who knew him.

Whether Rabbi Mike was teaching about clean “green speech” around somebody’s dining room table in the community, talking about the Torah portion at his welcoming, relaxed and engaging Shabbos table, counseling about marriage and parenting, or just talking about his kids and the meaning of life, it was always with a huge smile, a warm, happy heart and an unabiding attention to what you had to say, as if you were the only person in that moment. Because of the culmination of every interaction I ever had with him, and there were thousands, I am a better wife, mother, sister, friend and teacher because of his teachings to me, what he stood for and how he lived. I laugh more, I am less reactive, more attentive and accepting, and more sensitive with less judgement to where the other person is standing. He was a rare brand of human being.

He had a delirious and precious awe for God’s role in the minute to minute unfolding of life, and would marvel at most things that seem ordinary to most people. Not Mike! He had the mind and the eye to appreciate the Godliness in the way a complete stranger would say hello, or the way the children would run around in the village shul. He was blessed with an innate and seemingly endless capacity to understand, appreciate, and accept even the toughest and unexplainable threads of life, from which struggle and even suffering can emerge. I am not alone in feeling the reality that we have lost an extraordinary wondrous ray of light. He was a true role model for how to be an authentic happy person, and live a good life with God at the very center. A modern day tzadik.

His life was not long, but his reach was exceptionally so. When an earthquake happens, there is a large crack that creates loss, pain and an opportunity to rebuild, heal and grow. The pain of an earth shattering loss changes over time, but does it ever really disappear? I am suggesting it does not, rather it evolves. The loss empowers those who are left behind with a task. The task is to keep the Mike Stern spark in our hearts alive and giving love. Giving without expecting anything in return. Giving for the sake of the joy of giving. Our hearts are burning with pain now. As we share and live his legacy we will be carrying his eternal light of holiness in to our lives, and help those who he cannot. 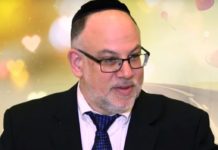 Rabbi Mike Stern, Founder of Rabbi Without Walls, Dies at 58