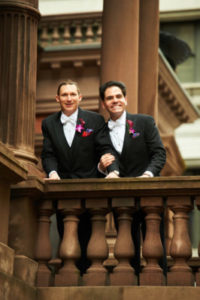 Mrs. Linda Joseph of Philadelphia announces the marriage of her son, Keith Brandon Joseph, to Dr. Jamin Christopher Morrison, son of Dr. and Mrs. John Morrison of Greenwood Village, Colorado. Keith is the son of the late Ronald Joseph.

The ceremony took place on Oct. 27, 2018, at The Union League of Philadelphia. Rabbi Julie Greenberg of Congregation Leyv Ha-Ir and Rev. W. Jarrett Kerbel of the Church of St. Martin-in-the-Fields, both of Philadelphia, served as co-officiants over an interfaith ceremony.

After a honeymoon in Asia, the couple resides in Philadelphia.