Barbecuing is primal, even dangerous. It’s looked on as a guy thing—all that fire, smoke, sharp implements and mountains of meat.

But hold on, folks! Women are drawn to that fire and smoke, too. Besides creating zesty marinades and scrumptious sides, complete with a dose of patience (think long, tenderizing brisket), women of all ages are influencing barbecue at home, opening popular restaurants and winning big on the professional circuit.

To tap into this growing trend, Jewish-run, kosher barbecue festivals are held during the warm-weather months from Memphis to Kansas to Texas and beyond. In Philadelphia, Dr. Stu Gordon spearheaded an annual charity event called Hava NaGrilla. Sanctioned by the gold-standard, Kansas City BBQ Society, the event draws thousands of cooks and hungry eaters who come to sample the fare. Stacey Kurtz’s Onion Cabernet jelly from Israel’s Tishbi vineyards and Blair Johnson’s Best Barbecue Rub steered Len Lodish, professor emeritus of marketing at the University of Pennsylvania’s Wharton School, over the top. He and his family team won Hava NaGrilla’s 2017 Best Brisket Award.

Brisket—the cheap, tough cut of meat that has always been a star at Jewish holiday tables—comes with tenderizing recipes galore. It’s alleged that Central and Eastern European Jews ate brisket as far back as the 1700s, especially at Passover, when multiple courses are served. During the late 1800s and early 1900s, waves of immigrants to the Southwest and Texas area started to exchange ideas with ranchers on how to smoke the cheapest and most plentiful cuts of beef: brisket.

Brisket is no longer cheap, but the thrill of smoking, long and slow, and the resulting melt in the mouth meat is making smoked brisket the star of home barbecuing. It’s not for the faint hearted. Smoking brisket takes time, dedication and a whole lotta love. How else can you explain an all-nighter where the temperature must remain around the 220-degree mark, with the meat judiciously turned and basted. Barbecue teams competing at events will start low-temperature cooking in late evening, jealously guarded and tended until early morning, when samples are presented to trained judges.

You’ll have full-scale mutiny if kid and teenage “purists” can’t fill up on time-tested hamburgers, hot dogs and all the fixin’s. Most anything can be cooked on the grill—from the wealth of seasonal veggies to chicken and fish. Barbecue corn with just a smattering of margarine or a touch of olive oil and seasonings, or jazz it up with your own fresh herb dressing. The same goes for zucchini, asparagus, onions, peppers or any other fresh vegetable (just make sure they’re all cut to a similar size so none burns). Simply toss in olive oil and garlic, and sprinkle with freshly ground pepper and kosher salt. Place in a grilling basket, char slightly to caramelize, and you have a colorful, healthy, delicious vegetable platter. If there are leftovers, which are unlikely, serve next day at room temperature.

Fish and chicken are easy barbecue favorites. I serve steelhead trout weekly, winter or summer, though it tastes divine when grilled. Simply brush with good olive oil and sprinkle with seasonings. Place in a basket to avoid flaking. Along with omega-3s, it’s packed with protein, vitamins and is low in mercury. Chicken legs, wings or quarters may be marinated overnight for flavor and to retain moistness before grilling. The winning recipe below is from my husband, the late Dr. Walter Hofman.

And no barbecue is complete without a sumptuous summer dessert. Lazy Gal Berry Crisp is bright and crunchy, using the ripest fruit of the season. The topping? A few handfuls of granola. The recipe included below is a family favorite, packed with plump blueberries and ripe strawberries.

To some joyful summer eating!

There are as many smoked brisket recipes as there are cooks. This one, adapted from Epicurious, is very straightforward.

*Order a whole brisket ahead of time.

*Fat should be trimmed to about ¼-inch thick to prevent meat from drying out.

*May substitute a favorite store-bought rub.

In a small bowl, mix the rub and brown sugar together.

Place the brisket on a baking sheet. Season the brisket rubbing the sugar mixture all over. Let sit at room temperature for 1 hour.

Heat the grill to 220 degrees. Adjust the heat as needed throughout cooking to maintain 220. After eight hours, insert an instant read thermometer into thickest part of meat. It should register 195-205 degrees. It may need to smoke a few hours longer.

Transfer to a carving board. Spoon Tishbi Onion Cabernet jelly over top.

Let rest before slicing against the grain, about one-quarter-inch thick. 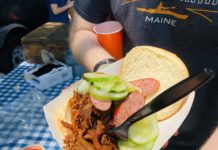 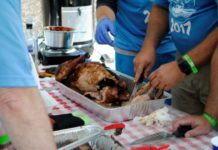