In his column (“Why Disingenuous Holocaust Analogies Matter,” June 27), Jonathan Tobin refers to those who use the term “concentration camps” to describe the detainment of migrants at our southern border as disingenuous. But it is Tobin who is disingenuous.

He conveniently ignores that FDR, Harry Truman and other officials used that term to describe the camps where U.S. citizens of Japanese descent were imprisoned by our government during World War II. In fact, Truman used the term long after the horrors of the Holocaust had been revealed, knowing full well the implications of his choice of words.

Tobin Op-ed Was On Target

How wonderful it was to read the Jewish Exponent this past week, especially the op-ed by Jonathan Tobin (“Why Disingenuous Holocaust Analogies Matter,” June 27).

Finally there’s a journalist who can state all the arguments for the subject of concentration camps. It was so exciting to me that there are some talented writers out there that are not afraid to pick up for the Jewish side of the picture.

I am so tired of “leftist” Jews who go out of their way to apologize if Jews complain about being blamed for being sensitive when it comes to words that describe the killings that went on by the Nazis and what takes place along our Southern border. I extend my thanks and wish there were more like Jonathan Tobin.

The danger of comparing any inhumane act to the Holocaust is it ignores its comparative scale, which makes the AOC statement (“Locals React to Ocasio Cortez’s ‘Concentration Camps’ Comparison,” June 27) seem hyperbolic.

However, what Trump is doing to these people does fit the dictionary definition of putting them in concentration camps. There are mass arrests of ethnic minority groups, without trial, placing them into overcrowded, unsanitary makeshift prisons where families are separated and many children have died.

I don’t wish to dehumanize any Holocaust survivor or the memories of those who died, but can’t we as a human community be united in defense of those calling out the powerful for treating the powerless inhumanely? That is a good way to retain the humanity of all victims, past, present and future. 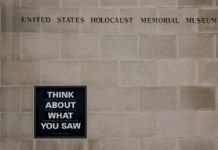