Off Boardwalk is presented by Juniper Productions, an independent theater producer based in Philadelphia that works to commission and develop local artists. Juniper has an interest in producing works that are directed, written and acted by women, including Jewish women and women of color, to create more mainstream roles for these perspectives in the Philadelphia theater world.

Harris, an accomplished stage and screen performer appearing in motion pictures such as Rocky V and 12 Monkeys, has also toured internationally as a vocalist, most recently playing the role of Ella in The Ella Fitzgerald Story. Harris will sing a variation of songs from the 1930s, such as “One Hour Mama,” all the way up to contemporary music, like “The Way,” by Jill Scott and Adele, as well as pop, jazz, including Ella Fitzgerald, and blues.

“It’s a light performance about love on the beach,” Harris said. “I welcome audience members singing and dancing. It’s a multidimensional experience.”

Comedic drag performer and composer Eric Jaffe, who is Jewish, recently starred in Basic Witches at Arden Theatre Co., and presents The Eric Jaffe Show, a monthly cabaret at TavernOn Camac in Philadelphia.

The series includes two one-hour shows every Friday night, from July 5 through Aug. 30.

The owners of Showboat Hotel approached Aronowitz about the summer series after seeing the series of Cocktail Plays she produced in a Philadelphia distillery. The Spirit Bar area of the hotel, located next to the boardwalk entrance that opens up to the former casino, worked brilliantly for cabaret performances, Aronowitz said. Using the arts as an agent for community growth is part of the Atlantic City revival program. Showboat and other hotels, like Hard Rock and Ocean Casino Resort, are working to develop the area newly branded as North Beach Atlantic City as a popular destination for Jewish shoregoers, Aronowitz said.

Aronowitz describes herself as a traditional Jew.

“I work 24/6 and keep Saturdays as my carefully guarded time to take a break from the intense and always ‘on’ work of producing,” said Aronowitz, a member of Congregation Kesher Israel in Society Hill.

Aronowitz grew up in Manchester, England, where she was inspired by an active local theater community, including Jewish productions.

Aronowitz married an American and moved to the Princeton area in 1991. She had a career in fundraising and public relations, and was an active member of Passage Theater Co. in Trenton for 10 years. She moved to Philadelphia in 2015 and decided to work in the theater industry full-time. Juniper Productions was launched in 2017.

At 54, Aronowitz, an arts entrepreneur, described Juniper Productions as her “second act.”

Juniper’s next production, 12 Chairs, by local playwright John O’Hara, is a story of a mother and daughter over a span of 40-plus years, told through 12 scenes. The cast includes Jewish actor Rebecca Neckritz in the role of the Mover. The production starts Sept. 19 as part of this year’s Philly Fringe Festival.

Aronowitz will travel to London in late July for the opening of Marx in SoHo by the Jewish social historian and playwright Howard Zinn, and produced by Juniper. The play stars Philadelphia actor Robert Weick. Aronowitz asked Harris, well known for her intimate, refined cabaret performances to join Off Boardwalk.

“With on-screen performances there is delayed gratification,” Harris said. “There is something about the applause and the reaction of a live audience that makes a difference — it’s the affirmation of my offering.”

Harris, 61, was born and raised in Germantown, where she still resides. She began singing in church at 3 and, at 23, auditioned for a gospel musical at Freedom Theater in Philadelphia. An agent spotted her during the performance and her career launched from there.

“I have spent most of my career touring, because in Philly there is limited work for female African-American onstage performing artists,” Harris said. 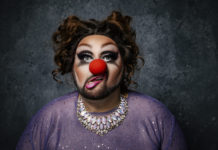