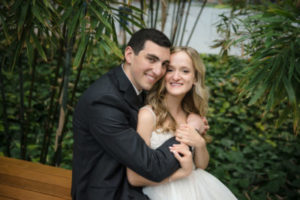 Drs. Rima and Andrew Himelstein of Delaware County and Jeanne Shatten and Larry Oscar of Shaker Heights, Ohio announce the marriage of their children, Daniel David Himelstein and Loren Rebecca Shatten. Loren is the daughter of Richard Shatten of blessed memory.

The wedding took place at the Cleveland Museum of Art on June 15. The bride’s sister, Rachel Vazquez-Reina officiated.

Dr. Julia Shatten, the bride’s sister, served as maid of honor. Jeffrey Himelstein, the groom’s brother, served as best man. Robyn Himelstein and Rachel Oscar were bridesmaids. Amelio Vazquez-Reina and Jason Oscar were groomsmen. Witnessing the signing of the Ketubah were Risa Waldoks, who introduced the couple, and Sophia Bellin-Warren.

Daniel is the grandson of the late Sidney and Pearl Herold, and Morgan and the late Libby Himelstein. He earned his Bachelor of Arts degree in chemistry from Haverford College and is a fourth-year medical student at the Lewis Katz School of Medicine.

Loren is the granddaughter of Beverlee and the late Leo Rosenbluth, and Shirley and the late Larry Shatten. She earned her Bachelor of Arts degree in psychology from the Ohio State University. She is the Chief Operating Officer of Challah for Hunger in Philadelphia.

After a honeymoon in Vermont, the couple resides in Philadelphia.