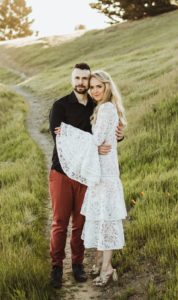 Nancy and Larry Davis of Lafayette Hill announce the engagement of their daughter, Stephanie Davis to Eric Kami, son of Doris Kami and the late David Kami of Delray Beach, Florida (formerly of Queens, New York). Stephanie is the granddaughter of the late Julius and Bertha Kauderer of Philadelphia, and the late Esther and Charles Davis of Scranton. Eric is the grandson of the late Arieh and Esther Kami of Israel, and Elisa Nifco and the late Samuel Nifco of Mexico City.

Stephanie is an Experiential Marketing Manager at Google in Mountain View, California. Eric is the CEO of the custom sock brand, TribeSocks.com.

The couple met and live in San Francisco. An October wedding is planned in Carmel Valley, California.