It was in the 1600s that the idea of Hibbut Hakever first emerged, whereupon a person entering the afterlife will meet the Angel of Death who will beat them for all sins committed in life. However, this can be averted upon reciting their name.

Sonia Gordon-Walinsky, 37, doesn’t incorporate pasuk into her artwork out of superstition, but instead as a means of connecting herself and others to the physical words of the Torah. Since 2003, Gordon-Walinsky has used calligraphy, the art of decorative handwriting, to creatively express a person’s name pasuk in a business called PasukArt. Many of her commissions come from people wanting to commemorate weddings, anniversaries, birthdays or Bar Mitzvahs.

“What compels me to create this artwork, this tradition, [is] it’s beautiful,” Gordon-Walinsky said. “And if something is important in the afterlife, then all the more so in the present life. So I see it as a personal mantra and a really beautiful way to connect people to the Torah.”

Gordon-Walinsky grew up in Philadelphia, where her mother worked as an art teacher and her father as a professional pianist. The two encouraged her to pursue creative activities, but it wasn’t until college that she started to merge her artistic endeavors with her passion for Jewish text.

It was while attending school at Albert A. List College of Jewish Studies that she tried her hand at calligraphy. Gordon-Walinsky used a two-page article on calligraphy from the book The First Jewish Catalog: A Do-It-Yourself Kit as a guide to teach herself the craft. Through experimentation, she eventually began to master the art.

“There’s a whole tradition that I was really drawn to,” Gordon-Walinsky said. “And there’s so much you can do with calligraphy; it’s so expressive. We have this really old tradition of Hebrew calligraphy, first of all from the Torah, and then from all the scrolls. They had a lot of fun with letters and bringing letters to life.”

While in school, she was introduced to Rabbi Sidney Greenberg, who had a practice of giving people a name pasuk and singing it upon greeting them. Gordon-Walinsky said the concept blew her away, and she was inspired to use her artwork to help express people’s verses.

Around 2008, her art started to leap off the page when she began writing on pottery her mother, Nina Gordon, created. The mother would drive out her soft and unfired pieces to her daughter while attending school in New York and later in Connecticut. The retired teacher described the experience as both wonderful and stressful, with the collaboration a way for the two to bond.

“It’s just extraordinary to have a relationship with a child that develops and evolves into something where we’re sharing on this level in a professional way,” Gordon said. “I love her work. She’s very creative, and she’s been very innovative in what she does.”

After graduating with bachelor’s degrees in American history and Jewish literature, Gordon-Walinsky worked in several positions while doing her art on the side. Eventually, she began to pursue art full-time after the encouragement of friends and went on to be a full-time Drisha Institute Arts Fellow. This experience would change how she saw her art.

“It was really quite transformative,” she said. “By the end of the year, I distinctly remember feeling that my identity was as an artist, whereas before I don’t think would have.”

In January, she moved back to Philadelphia where she now lives in Mt. Airy and works in her home studio. She’s also led workshops with community members on calligraphy and is creating a line of prints of the more common Hebrew names with a name pasuk to make the art more accessible and affordable for people. Whether it’s pasuk names or simply writing out portions of the Torah, Gordon-Walinsky said, “It’s all about connecting to the literature of the Torah.” 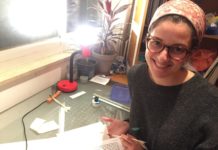 The Growing Ranks of Female Scribes