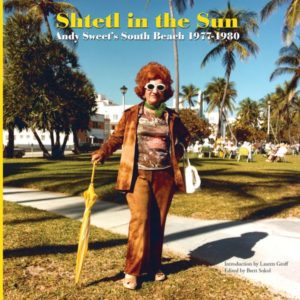 Jerusalem By the Beach

Flipping through the gorgeous color photographs of Shtetl in the Sun: Andy Sweet’s South Beach, 1977-1980, one gets the sensation of looking through a distant cousin’s family photo album.

There’s a hint of familiarity — is that Uncle Steve, back when he had hair? — but it is clear that this is a collection of something beyond the reaches of your memory. Strain to remember, and it becomes like a dream: The application of effort only hastens its demise. What was this?

Or perhaps the question is, as novelist Lauren Groff asks in the introduction, what is this? Groff relays a conversation she had with Sweet’s closest friend and fellow photographer, Gary Monroe, who insists that a photo is a fixed object, an “anti-narrative” by dint of its immobility — outside of time. Groff, perhaps simply illustrating the difference in artistic philosophy between writers and photographers, disagrees.

“Because even when we look at works of art made by anonymous creators, we humans — creatures of narrative — will infer stories simply by the act of regarding,” Groff writes.

I agree. These photos are laden with stories, ongoing.

More than 20,000 elderly Jews made up nearly half of South Beach’s population in the years between the glittering Miami of the ’60s and the Miami Vice ’80s, the writer Brett Sokol notes in the foreword. These “New York transplants and Holocaust survivors still had plenty of living, laughing and loving to do,” according to Sokol; if you find that sentiment a bit too sweet to chew, you’d be forgiven.

But then you get to Sweet’s photos themselves — dug up after years wasting away in a storage unit — and you see what Sokol is talking about.

It’s yet another iteration of the Diaspora story, with Jews plonked down in another locale, borrowing from and loaning themselves to their new lands. In the photos of the most visibly Jewish — a graybeard with tzitzit and a black hat swinging from a palm tree near the beach comes to mind — this COPY-PASTE feeling is most prevalent.

There’s humor to many of these photos. I promise you won’t get in trouble for snickering at a serious minyan of men in Panama hats and fedoras, or of a posed shot of some Bar Mitzvah-aged boys wearing three-piece suits in colors that have long since been banished from this world.

But you have to promise to see the joy and the optimism that things would continue, which you can see in a confused-looking older woman with her glasses askew, a Happy New Year’s tiara and a half-drunk cup of something in her right hand. It’s there at the 1978 Yiddish Cultural Festival of the Jewish Community Center of South Florida. It’s even there in the ugliness, young men marching in a JDL parade bearing signs and slogans (“THERE IS NO PALESTINE,” one reads). Beautiful, ugly, totally mundane: These people believed that this fragile thing would continue to perpetuate itself.

And perhaps that brings us back to the disagreement between Groff and Monroe. In a sense, these photos are of an era that’s long receded, snapshots of a single moment of optimism. But to Groff’s point, these scenes of awkward teenager-hood and kibitzing grandmothers are miniature stories in themselves, ones that you know. They could’ve been taken yesterday.