June 7 may have been an average day for many, but it was monumental for one Balkan nation.

On that day, American Airlines launched a new service from Philadelphia to Dubrovnik, Croatia — the first direct flight between the two countries in 28 years.

Croatian Ambassador to the United States Pjer Simunovic visited Philadelphia for the occasion, joined by State Secretary Tonci Glavina and State Secretary Frano Matusic of the Republic of Croatia Ministry of Tourism.

During the trip, the Croatian delegation attended a gala held at the National Constitution Center with Philadelphia Mayor Jim Kenney, stopped by the St. John Neumann Shrine to deliver prayers in memory of D-Day and was present for a Croatian flag-raising ceremony at City Hall. State Rep. Jared Solomon also read a resolution at the Betsy Ross House commemorating the Dubrovnik City State as one of the first to recognize the United States as a nation.

And in between that activity, the three diplomats even spoke a bit about Israel.

Simunovic mentioned his time in Israel and his interactions with the Jewish people there, having served as his country’s ambassador from 2012 to 2016. He said he’s made many lifelong friends from his time there.

“I always say to whoever ask me [about my time in Israel] that it was easy to get me out of Israel, but it was almost impossible to get Israel out of me,” Simunovic said. “It was truly a formative experience.”

Located in Southeastern Europe and bordering the Adriatic Sea east of Italy, Croatia is one of several nations formed after the breakup of Yugoslavia in the 1990s. In 2009, Croatia became a full member of NATO and was admitted into the European Union in 2013. The country has a population of about 4 million, of which Glavina said about 90% are Catholic.

In 2001, it was estimated that about 1,700 Jews lived in Croatia, a fraction of the some 20,000 that called it home before the Holocaust. But Jewish tourism to Croatia is booming. Glavina said between 70,000 and 100,000 Israeli tourists visit the country each year, with one of the hot spots being Dubrovnik.

“Croatia is one of the stars of tourism over the past decade, and we’re surely moving into that group of the top-20 most competitive tourism countries in the world,” Glavina said. “We are very open to guests from all around the world. Croatia, maybe in the past, was primarily known as a vacation destination for many surrounding European countries, but over the past several years we’ve made a strong focus on foreign markets.”

The city of 40,000, a UNESCO World Heritage City, is near Croatia’s southern coastal tip. It has drawn more attention in the past few years because it was the filming location of King’s Landing in the HBO series Game of Thrones.

It’s also home to the Dubrovnik Synagogue, the world’s oldest Sephardic synagogue still in use and Europe’s second-oldest synagogue. It was established sometime after 1407 when Jews were allowed to settle in the area by the Dubrovnik Senate. Today, it mainly serves as a museum, with its main floor used for worship services on holidays and special occasions.

“No matter where you find Judaism, there is a deep spiritual link connecting Jewish people,” Simunovic said. “Many Jewish communities being expelled from Portugal and Spain found refuge in Dubrovnik, but also in the other [Croatian] cities along the coast, such as Split, and they’ve been contributing immensely to the cultural, political, material life of the whole region — Ashkenazi in the north and Sephardic in the south.”

The group also spoke of the military cooperation between Croatia and Israel, but shared their disappointment that a proposed sale of 12 used Israeli fighter jets fell through. The deal, valued at around $500 million, was canceled in January due to objections by the United States. The jets were manufactured by the U.S. in the 1980s and later upgraded by Israel with sophisticated electronics and radar systems. When the U.S. demanded that the technology be removed before the aircraft were handed over, Croatia terminated the sale.

“Unfortunately, we didn’t succeed [in buying] these airplanes from Israeli,” State Secretary Matusic said. “We were so close.”

While Croatia may not have those military planes, catching a commercial flight there is easier than ever. The Philadelphia-to-Dubrovnik flight will run on Tuesdays, Fridays and Sundays, and from Dubrovnik to Philadelphia on Wednesdays, Saturdays and Mondays. Flights will run June through September. 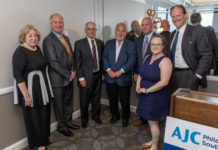