By the Jewish Exponent Staff

There’s no agreed-upon reason for why it’s customary to eat dairy on Shavuot, but if you’re Jewish and reading this, you know that’s kind of the deal with most things — Rabbi A said B, Rabbi X said Y and Rabbi Z came out of nowhere with X^2, and in the end, we do some sort of composite of the three.

Some say that we eat dairy on Shavuot for a very simple reason: Shemot 3:8 tells us that Israel is a land of milk and honey. There’s also the fact that the four Hebrew words that describe the sacrificial meal offering on Shavuot spell mei halav, meaning “from milk.” That’s a pretty convincing explanation, but like we said, take your pick — some Kabbalists say that the numeral value of the word halav (milk) is 40, equal to the amount of days Moshe spent receiving the Ten Commandments.

Here at the Jewish Exponent, we’re just as interested in practice as we are in theory, so our brave reporters and editors headed out into the field to find some of the best dairy in the Greater Philadelphia area. With our small staff, we were unable to hit every worthy establishment, so keep that in mind. This list is not meant to be exhaustive.

The ricotta cheesecake with strawberries was unbelievably good. A plump, fresh strawberry was placed on top of some exceptionally good whipped cream and dusted on the outside with what seemed like crumbled up bits of cheesecake base. It was served on top of a cute little gold cardboard plate, and it survived a long Uber ride from South Philly back to 2100 Arch. —Jesse Bernstein

The trouble with eating at Reading Terminal Market is that

there are so many good smells in the air that, if you pick incorrectly, whatever you’re eating seems like a mistake. The marbled chocolate New York cheesecake at Termini Brothers passed this test, outpointing the French fries to my right and the poutine to my left. Could’ve used a little bit more chocolate but I’ll live. —J.B.

Hymie’s and Murray’s have served as twin Main Line deli beacons for decades, with each claiming their share of supporters.

In reality, the food generally seems comparable — thanks in part to your friendly neighborhood Sysco truck — but Hymie’s wins points for its pickle bar (pro tip: the various macaroni, potato and onion/tomato salads on the bar are also worthwhile). But Hymie’s can be a bit too loud and in your face, so if you want a more low-key experience, Murray’s is where it’s at.

But this exercise required a taste test of both establishment’s cheesecakes, so I procured samples from both places late morning on June 2 and let my palate be the judge. It should be noted that Murray’s slice cost only $3.99 but was roughly half the size of Hymie’s slab for $7.95, so there’s no real price difference.

And the winner was…

Murray’s by a fairly wide margin. The crust was crisper and the cheesecake itself was a bit lighter and had a faint taste of nutmeg.

The Hymie’s sample wasn’t bad by any stretch, but the crust was a bit soggy and the creamier cake didn’t have the same bite as Murray’s. Hymie’s did offer a cherry topping — declined for a more equal comparison — that might have evened things out a bit. —Andy Gotlieb

If someone had never had tasted ice cream, Franklin Fountain is where I’d take them. This is the standard for comparing all other ice creams. No wacky flavors or

gimmicks. Just a good, solid flavor with a thick texture. In a world of parlors trying to outdo each other with flavors like Garlic Bread or Shrimp Scampi, sometimes it’s nice to go with a classic. I got the Black Raspberry and, yeah, it was pretty good. Was it worth the line of tourists? I’d say so. Just remember to bring cash. —Eric Schucht

If Franklin Fountain is classical music, then Little Baby’s is jazz. Its flavors aren’t so out there that they’re unapproachable, but they can still be pretty unusual. I tried a sample of their whiskey ice cream, which I assumed was ice cream made to taste like whiskey. Turns out they put real whiskey in there, and I could tell. Not my cup of tea, so I played it safe with the Black Cocoa Marshmallow. A nice chocolate ice cream with surprisingly pillow-soft marshmallows. A good dessert for ending a weekend. —E. Schucht.

Scoop DeVille sells an assortment of cakes, milkshakes and other tasty treats, but I was immediately drawn to their blends — ice cream with various toppings mixed in. They had a mix of recommended blends, as well as some beneath the counter, which were available for trying. My favorite ice cream add-in is cookie dough, so I went with a blend underneath the counter called Dough Boi. This one took peanut butter ice cream and threw in double fudge cookie dough, peanut butter cookie dough and chocolate chip cookie dough. The texture of this ice cream was superb, creamy and so thick it reminded me of cake batter. The cookie dough pieces were good, as well, though I did find myself wishing I had gone with a flavor that had a little less peanut butter. —Selah Maya Zighelboim

I’m a Honey’s regular, but I never knew they had ice cream here. It’s not on the menu and

the waiter only mentioned their deep-fried banana split after being prompted twice — the first time for dessert options, the second time specifically for ice cream and sundaes. On presentation alone, this banana split gets all the points. It was a heaping pile of ice cream, banana, whipped cream, strawberries and chocolate syrup. You can’t go wrong with that kind of combination. However, once you get past how decadent it all looks, you start to realize there’s not a whole lot too amazing about the flavor. The fact that the banana is deep-fried does add to the texture, though not too much to the taste. It was good, yes, but it was also a banana split. How could it not be? —S.M.Z.

The homemade Philly Flavors will not disappoint you. I visited the Fairmount location to test the gelato and Italian water ice. There are 31 homemade Italian ice flavors, and eight sugar-free options. I sampled Sour Cotton Candy and Tangy Tangerine mixed together. It was like a sweet, frosted tangerine, with a tangy pop. They offer a variety of sweets, such as ice cream, frozen drinks, sundaes, and homemade ice cream cakes, including Reese’s peanut butter cup and Oreo flavors.

I stopped at Frutta Bowls to sample the powerhouse smoothies, and the Chocolate Explosion does its name justice. Chocolate whey protein, banana, Nutella, peanut butter and almond milk combined delivers a peanut butter blast. They offer other smoothies such as the Green Machine, the Pink Flamingo and the Brazilian Shake. Frutta Bowls is known for its fruit bowls with an açaí base, topped with layers of granola and fruits. —E. Silverman

If you’re looking for classic Americana with your ice cream, Mt. Airy’s Trolley Car Diner is the place to go. Outside the diner, in the parking lot, there’s a decommissioned trolley car where patrons line up in summer months to buy ice cream in a plentiful array of mostly familiar flavors — from butter pecan to mint chocolate chip, with Birthday Cake and Moose Tracks thrown in for good measure. The water ice ranges from standard cherry and blueberry to the more adventurous Candy Fish and sour apple. If the weather isn’t cooperating, go inside the diner for the famed milkshakes, which are named for diner-appropriate celebrities like James Dean (chocolate) and Little Richard (coffee). There are also “adult milkshakes” like the Betty Page, which mixes vanilla ice cream with Kahlúa, banana liqueur and crème de cacao.

Zsa’s is an entirely different experience of ice cream — pure, indulgent and gourmet. Every batch is handmade with the finest, freshest ingredients; “seriously from scratch” is their tagline. The Germantown Avenue shop doesn’t sell cones just yet (though that’s in the works), but stop by to buy a pint of some of the richest, smoothest, most flavorful ice cream you’ll ever eat, or grab one of the delectable ice cream sandwiches from the freezer (I’m a big fan of the sandwich that packs a creamy wedge of vanilla ice cream between two toffeed graham crackers with slivered almonds on top. It’s the only ice cream sandwich I’ve ever eaten with a spoon and fork). Without any fake ingredients, a pint of Zsa’s ice cream lasts a surprisingly long time in the freezer — a few bites are rich and satisfying enough for a cool after-dinner treat. Favorite flavor of the moment: Lavender Honey, which is as floral and sweet as it sounds. —L.S. 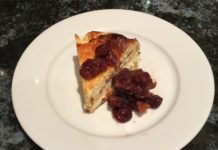