Three Jewish organizations plan to protest at the DC Dyke March on Friday in opposition to the march organizers’ decision to ban “Israel symbols,” including, in some cases, the Star of David.

Tyler Harris, executive director of A Wider Bridge, a pro-Israel LGBTQ organization, said the ban excludes members of his group.

“We are people who are part of this community who have been discriminated against and excluded,” he said “And they ignore us. We deserve a seat at the table.”

A Wider Bridge will participate in the protest, which Harris called a “march for true inclusion.” Other participants include the Jewish Community Relations Council of Greater Washington and Zioness, a progressive Zionist organization.

On Thursday, the three groups released a statement criticizing the Dyke March’s Star of David policy.

“The DC Dyke March should know better than to stoke the flames of division and pain by driving a wedge between Queer Arabs and Jews at a time we must stand united against homo- and transphobia, anti-Semitism, and Islamophobia. We hope that they will do better – for the sake and advancement of all of our communities,” the statement said.

“Hopefully, other Jewish people will stand in solidarity and march with us. We’re going to stand our ground. It’s a public street and a public place,” said local LGBTQ activist AJ Campbell, who also signed onto the statement.

Yael Horowitz, a Jewish organizer of the Dyke March, said that organizers are asking “that participants not bring pro-Israel paraphernalia in solidarity with our queer Palestinian friends,” The Washington Post reported.  “Jewish stars and other identifications and celebrations of Jewishness (yarmulkes, talit, other expressions of Judaism or Jewishness) are welcome and encouraged,” Horowitz said.

Reached on Facebook, a Jewish organizer offered no clarification about in which contexts the Star of David will be permitted at Friday’s march. Pride flags resembling the U.S. flag are also banned, while flags with pro-Palestinian symbols are permitted.

This is not the first time that a Dyke March has banned pro-Israel and Jewish symbols. Two years ago, three women were kicked out of the Chicago Dyke March for displaying pride flags with the Star of David on them. The incident gained national attention.

“The organizers have a chance to apologize,” Harris said. “If they recognize [that] and make a public apology, I think we can move forward with them. Otherwise, we will meet [with other organizations] and talk about an alternative space that is fully inclusive that can be made to replace this discriminatory event.”

Samantha Cooper is a staff writer with Washington Jewish Week, an affiliated publication of the Jewish Exponent. 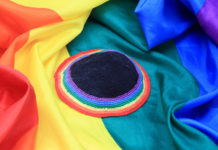