On the fourth floor of Boyds, I am crouched beneath the hand dryer, desperately trying to return some semblance of order to my hair, damning to eternal hellfire the engineer who determined that it should blow for no more than three seconds at a time.

Just before I arrived at the Israel Bonds Philadelphia Women’s Division Fashion Show, a biblical downpour soaked me through coat, shirt and undershirt. I look like I just stepped out of the shower.

Meanwhile, about 50 women were at Philadelphia’s quintessential luxury department store to enjoy a lecture from an Israeli fashion historian and curator, as well as, yes, a fashion show — down the middle of the room, between six square glass tables that each seat eight, a low black rug serving as the catwalk. Each of the attendees is a member of Israel Bonds’ Philadelphia Women’s Division, having bought a $5,000 bond in advance ($2,500, for first-timers).

Stepping off the elevator, guests are greeted by three different types of champagne and a row of espadrilles patterned with repurposed scarves — Hermès, Missoni, etc. — from a company called Respoke (retail cost between $395-$495 — 10% of the sales go to Israel Bonds). To your left, the bathroom and the accursed hand dryer, which “works” insofar as, having stepped out of my catcher’s squat, I now look simply perspiration-prone; to your right, the reception area, and an L-shaped buffet table with a selection of hors d’oeuvres and desserts.

Smooth Israeli music is playing. Everything is brightly lit beneath the fluorescent rail lights, especially the lox on the miniature bagels. Toward the front, two sections of wall have about an 8-foot gap between them — this is where the catwalk begins. Next to the gap is a lectern framed by two walls with large glass plates that read, “BOYDS | Philadelphia,” along with two large TV screens that say the same.

Within two minutes of my sitting down, a woman at the table with me determines that I went to middle school with her son.

“You’re starting with dessert?” asks another woman in a beautiful turquoise pantsuit with flecks of black and white, as I put fork to a heart-shaped chocolate.

“He’s an adult, he can start with whatever he wants,” says someone else at the table.

Either way, it’s delicious (I think there was ganache inside), and I like everyone at this table immensely.

Around 7:15 p.m., the program begins, with introductions from Harold Marcus, executive director of the Pennsylvania region of the Development Corporation for Israel; Missy Dietz, the director of business of development of Boyds; and Terry Masel Auerbach and Kris Gross, the “Golda Chairs” of the evening.

The Israeli lecturer is introduced: fashion historian and curator Keren Ben-Horin, the co-author of She’s Got Legs: A History of Hemlines and Fashion, and editor of The Sweater: A History. She has cool inner forearm tattoos and, as my tablemate Maureen notes, the understated fashion of truly fashionable people.

Her lecture, “In the Melting Pot: Fashioniable Identities in Israel,” is a capsule history of trends in Israeli fashion — political, financial and aesthetic — and is delivered mostly to a low rumble, and not from the thunderstorm. She talks about the development of a distinctly Israeli sense of fashion, often in conflict with the socialist simplicity modeled by David Ben-Gurion and his wife, Paula, who wore the proletariat brand ATA (recently relaunched).

Eastern and Western European Jews brought their influence, followed by Jews from North Africa, the Balkans and Arab countries, each changing the national dress with their arrival in critical numbers. Clicking through a slideshow on the TVs, Ben-Horin shows us dresses from Israeli designers like Roji Ben Yosef, Lea Gottlieb and Finy Leitersdorf. Ofra Haza models a Gottex dress that clearly references the vestments of the Cohanim. There’s also a contemporary high-fashion dress with images of the fashion-averse Ben-Gurion on it; I read my dead French philosophers in college, so I know that this means something, even if I don’t know exactly what.

Finally, the fashion show begins. It is four Beach Boys songs long — “Fun, Fun, Fun,” “Louie Louie,” “Barbara Ann” and “I Get Around” — which is, coincidentally, the number of models this evening.

You forget sometimes that models are picked much in the way that athletes are: for their mutant genetic qualities, except instead of having a 40-inch vertical jump, they can make a dress that looks like a garbage bag (boxy, black, shiny) look ridiculously good.

They stride confidently to polite applause and wear lots of bold floral prints. There is one outfit — white blouse; long high-waisted gray skirt with a bow that nearly reaches the floor; small brown handbag — that I can only say was reminiscent of a WWII-era schoolteacher in the English countryside who meets a charming American soldier named, like, Jimmy Cornhusk. At the end of the show, we all clap again.

The women’s division chairs, Lois Kaliner and Daryl Segal, thank us for coming, and remind us that we have $50 Boyds gift certificates in the totes on the back of our chairs. Maybe I’ll get a shoelace or something.

Sharon Richman, who so graciously invited me to the fashion show, reminds everyone: It’s milestone season, and Israel bonds are a great gift for dads and grads. 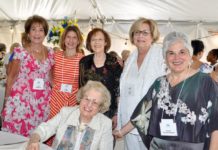 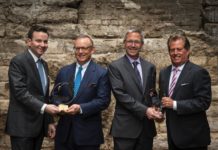 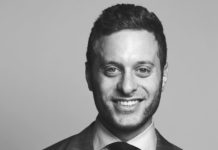