They were cited for their decades of service to the schools, especially their work in spearheading the creation of OROT, a program for children with learning difficulties that recently celebrated its 20th anniversary.

The evening was also an occasion to announce the fundraising numbers and programmatic growth over the past year. Board of Directors President Ruth Horowitz said the annual campaign raised more than $1.3 million. Concurrently, $600,000 in restricted gifts were raised, as well as $1.6 million in earned income tax credit (EITC) donations. Additionally, Head of School Judy Groner announced that the Ganon program, the junior kindergarten of Perelman, had seen its attendance double in size over the past year.

Attendees milled about the hallway separating the auditorium and the sanctuary as officials took to the loudspeaker to plead with them to take their seats so the program could begin; after a few abortive attempts, the three Perelman students who were there to partially emcee the evening were sent out onstage. That seemed to do the trick to seat everyone.

Each of the long tables was decorated with small plants, and each attendee was served an appetizer of artichokes, cherry tomatoes, olives, peppers, Brussels sprouts and garlic cloves. Before the bar opened at the ceremony’s conclusion, waiters served cocktails of tequila, grapefruit juice, lime and soda. Following the ceremony, attendees were treated to an open bar and a buffet dinner.

Norry contributions to PJDS were extolled throughout the ceremony. Fifth graders Noa Singer, Noah Cohen and Abigail Gober bridged the gaps between the adult speakers, thanking the couple for their involvement and confidently telling the story of how they met — at a fundraiser in the ’80s for the airlift of Ethiopian Jews to Israel.

Groner and Horowitz took turns listing reasons for the selection of Gail and Elliot Norry as this year’s honorees.

Elliot Norry has been on the board for 20 years, and Gail Norry served on the board, too. Each have long resumes of involvement in the larger Jewish community as well. Gail Norry has been chair of the National Women’s Philanthropy and National Young Leadership of the Jewish Federations of North America, and is a vice chair of the Jewish Federation of Greater Philadelphia. Elliot Norry is a past president of the board at PJDS.

Between speeches, there was a video shown, “Powered By Perelman,” highlighting the virtues of the dual religious-secular curriculum.

Gail and Elliot Norry have sent three children — Dahlia, Ben and Jordana — to the school, but have remained active long after their respective graduations. Gail Norry is a co-founder of OROT, an educational program dedicated to enabling children with learning difficulties to attend classes tailored to their needs. She was originally spurred into action by her then-3-year-old son Ben’s autism diagnosis.

Today, OROT (Hebrew for “lights”) has nearly 50 students in 10 classes throughout Jewish day schools in the Philadelphia area.The cumulative effort has been to create a school “for the whole community,” Gail Norry said. For her own children, she “loved the school, loved the inclusivity.”

Both Gail and Elliot Norry were pleased with the program, thanking all in attendance and enumerating all the reasons why Perelman has remained near and dear to them.

“We know it is not easy or inexpensive to be our friends,” Elliot Norry said to laughs from the crowd.

Groner, who was hired by a search committee chaired by Gail Norry, and has known them for decades, was as effusive in her praise of them the day following the event as she had been during the evening itself.

“They’re just utterly dedicated to everything about Jewish life and living. There’s no other way to put it,” Groner said. “Everything they do is for the continuity of the Jewish community.” 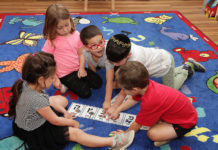 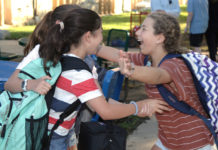 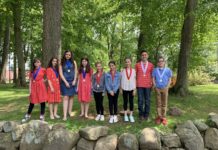