After traveling to Israel for the first time with his wife, Allison, on a 10-day Isarel360 trip for couples in 2014, Brett Benton wanted to give back to the Jewish Federation of Greater Philadelphia.

“Getting to see and experience the Western Wall, especially with my wife, had an impact,” Benton said. The trip “provided a lot of exposure to the work that [Jewish] Federation does, and I wanted to remain involved when we returned,” he said.

Benton, 39, is a partner at the law firm Richard M. Ochroch & Associates, P.C. in Philadelphia and serves on the board of NextGen, a young professional affinity group within Jewish Federation.

“My wife and I are in the NextGen age range, and when an opportunity to serve on the NextGen board came up, I took it,” he said.

Benton and his wife participate in several NextGen events, such as community Shabbat dinners and programs organized by the Jewish Relief Agency to pack food donations. NextGen also partners with Habitat for Humanity to repair homes for seniors in Northeast Philadelphia.

“Supporting the Jewish community is important to both of us,” he said.

Aside from his law practice, Benton provides legal support to abused and neglected children as a volunteer attorney at the Philadelphia Support Center for Child Advocates, where he represents children in dependency actions.

Benton serves on the board of the Pennsylvania Court Appointed Special Advocates Association, which provides training to volunteers to advocate for children in dependency actions. In addition, he is a member of the Philadelphia Bar Association and an elected committee person on Philadelphia’s 30th Ward Democratic Committee.

He lives in the Graduate Hospital area and plans to stay in the city. Benton is an avid Philadelphia sports fan and watched the Sixers playoff season with great anticipation.

“The Sixers are so much fun to watch — I love the energy that Joel Embid adds to the team,” he said.

This article is part of an occasional series of profiles of Jewish Federation of Greater Philadelphia supporters. 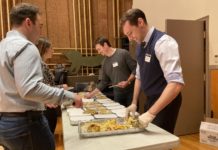 Volunteers Prepare Food for Cook for a Friend 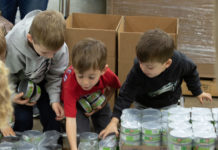