Robert Klein has a lot of things he wants to say about comedy, about being Jewish, about Donald Trump and more.

But there’s one thing he wants to make clear about his stand-up show, coming to the Bristol Riverside Theatre on May 25 and 31, on a joint tour with Louie Anderson:

Klein, 77, certainly has earned the right to try things a little bit out of the box, if he wants. A career that began in the ’60s and has brought with it everything from nominations for Grammys, Emmys and Tonys to key roles in the second and third installments of the Sharknado franchise gives a man a certain leeway when it comes to his material.

Not that he’s out to make anyone “squirm,” as he puts it. He likes to talk about politics — indeed, perhaps his seminal album, Mind Over Matter (1974), is largely concerned with Watergate — but he’s ultimately a comic.

“My aim is for laughs, not to preach,” he said.

Klein grew up in the Bronx, the grandson of Hungarian Jewish immigrants who came to America at the beginning of the 20th century. He spent summers working in the great Jewish Catskills hotels, and though upstate became a haven for him — he’d eventually attend Alfred State, in western New York — he experienced anti-Semitism here and there. He remembers his grandfather’s sandwich being deliberately over-peppered at a roadside sandwich stand to the point of discomfort once, and has no doubt it was because he was visibly Jewish.

He went on to Yale Drama School, where he refined himself as an actor and learned about an opportunity at The Second City, the legendary improv troupe that launches careers in comedy to this day. He auditioned (with Fred Willard, incidentally) and was accepted; that spirit of improvisation, he said, still affects the way he approaches comedy.

After returning to New York, Klein was cast by the late Mike Nichols in the Broadway musical The Apple Tree, alongside actors like Alan Alda and Barbara Harris. To this day, Klein incorporates music into his act, often accompanied by his longtime comedy partner, Bob Stein. In 1979, he was nominated for the Tony Award for Best Performance by a Leading Actor in a Musical for his portrayal of Marvin Hamlisch in They’re Playing Our Song.

Comedy has always been and remains his first love. He’s recorded numerous HBO specials, two of them pushing 90 minutes, and was an early host on Saturday Night Live. A recent movie about his life, Robert Klein Still Can’t Stop His Leg, features comedians like Bill Maher, Jerry Seinfeld and Jay Leno talking about Klein’s influence on them in the beginning of their careers. For a time in the ’70s and ’80s, he was one of the world’s most famous comedians.

Though not as much of a household name as he once was, Klein said that he feels like he’s “better than I’ve ever been.” Not as “agile,” he noted, but he continues to “prowl the stage like a tiger.” “I like to consider myself a one-man show,” he added.

When it comes to politics, he does his best to write material that will age well; he feels that only here and there can a comedian find lasting jokes in politics. He does truly believe that jokes about Larry Craig and Bill Clinton (“a Rhodes scholar from the waist up”) will continue to be funny for a long time.

He’s less sure when it comes to President Trump. “Trump himself at the moment is not that funny,” Klein said.

He recently filmed an appearance on the reboot of Will & Grace with Alec Baldwin, the frequent Trump impressionist, and told him, “If you were doing that in Turkey or Egypt, or Saudi Arabia or Russia or China, you’d be in jail or dead.” He does enjoy John Oliver’s takes on Trump, calling him, “that terrific English kid on HBO.”

In the end, though, what he finds comedy in is simply his life. When he was young, he talked about his childhood; when he was married, he talked about marriage; now that he’s older, he talks about aging. What’s most important, he said: “I’m good in person.”

He did, indeed, send a parting joke for the readers of the Jewish Exponent.

Two medical students are walking down the street, and they see a man walking towards them with an odd limp to one side. “It’s a sciatica,” one of them says. “No, no, you’ve got it wrong, it’s a displaced hip,” says the other. They go back and forth until they’re nearly upon the man. One student asks him: “Sir, do you mind if we ask you a quick…” 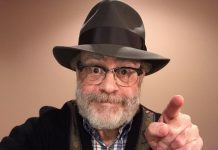 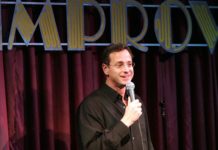