By Naomi Kahn via JNS.org

The most recent report released by Israel’s State Comptroller includes an in-depth look at the housing situation in Israel and points out the particularly dire crisis in the Arab sector.

According to the report, there is an annual shortfall of some 5,000 units in Israel’s Arab communities, which creates an untenable reality of overcrowding and high prices.

The report and the virtually automatic reactions to its findings issued by leaders of the Arab sector repeat worn-out mantras that place the blame on Israel’s government, the national planning authorities and a host of “usual suspects” who are accused of dark political motives, racism and discrimination of all sorts. But do the facts bear out these accepted wisdoms?

Although the Israeli government is often accused of deliberately orchestrating the housing crisis in the Arab sector by creating a bottleneck of approved municipal master plans, the facts paint a different picture altogether.

Analysis of the data, which is readily available to the public on the government’s website, indicates that in the overwhelming majority of non-Jewish communities in the Haifa-north region there is a complete, up-to-date inventory of approved statutory plans for the construction of thousands of housing units in each community — in full compliance with the law and with standard and accepted procedure.

Overcrowding in Israel’s Arab sector is not the result of discriminatory land-allotment policy; it is the result of improper implementation of local development plans, failure to enforce the law against illegal construction which obstructs implementation of municipal plans and the unwillingness of this sector to undergo a gradual process of urbanization.

Here’s a fact: For the 2016-2020 period, more than 22,000 housing units are in advanced stages of approval and marketing — a number that outpaces the reported annual shortfall, with room to spare.

Why, then, despite the state of Israel’s concerted efforts and massive investment in planning, zoning and marketing state land in Arab communities, does the housing shortage in the Arab sector continue to deepen?

According to Regavim, a public nongovernment organization that has been at the forefront of creating a coherent, comprehensive land-use policy for the state of Israel for more than a decade, “the real culprit is not some imaginary discriminatory land-allocation policy.

“The wrench in the works is illegal construction, which obstructs the implementation of the approved plans — and this rampant, disruptive construction is a direct result of the policy of non-enforcement that has characterized the state of Israel’s relationship with the Arab sector for decades.”

Another factor is the Arab sector’s continued rejection of urban-style construction, with the oft-repeated claim that high-rise living is “not suitable for Arabs.” The government has approved and marketed high-saturation housing units in the Arab sector with limited success. Leaders of these communities often claim that such solutions are culturally inappropriate; nonetheless, 20- and 30-story buildings are not a rarity in the Arab cities of Ramallah, Nablus and Gaza.

The new city of Rawabi near Ramallah is a shining example of a modern urban center, built according to a development concept based on high-saturation housing that conserves valuable land resources.

The solution to the housing crisis in the Arab sector can be solved by the state of Israel with a few not-too-complex steps.

The next step toward solving the crisis depends on the Arab sector’s leaders and laypeople accepting the facts of life: The resolution of their perpetual housing crisis, and the way to improve planning, construction and infrastructure in Arab communities, is through uncompromising enforcement of construction and planning laws.

If construction is allowed to continue willy-nilly — with no planning, infrastructure, oversight or accountability — there will be no way to build organized modern cities.

Law enforcement enables development to proceed; when coupled with high-saturation urban design, enforcement will allow already-approved plans to be implemented and the housing crisis to be resolved.

Naomi Linder Kahn is director of the International Division of Regavim in Israel. 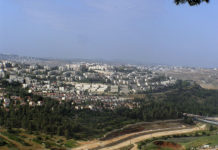