Indecency, it could be said, is in the eye of the beholder; one man’s unthinkable obscenity is another’s line to be smudged, erased and perhaps never redrawn.

Paula Vogel’s Tony Award-winning Indecent, coming to the Arden Theatre Co. starting on May 29, is the story of a traveling indecency, a globe-trotting boundary- pusher of a play that is as consequential for its performers as it is for its audience.

Indecent tells the true story of Sholem Asch, a playwright of the early 20th century whose play God of Vengeance catapults him to fame in Europe. Performed in Yiddish, it is perhaps a little short on Yiddishkeit for the audiences of its day — the central romance is between a prostitute, Manke, and the brothel owner’s daughter, Rifkele, and a Torah is tossed across the room — but the play is a smash.

Asch and the cast head to the only other Yiddish-speaking population center in the world outside of Europe to make their fortune: New York. But when they arrive, they find that their own sense of what is acceptable for the stage challenged, as audiences and censors alike take umbrage, to say the least, with what makes the play what it is.

The Arden’s production is one of “real joy,” said director Rebecca Wright, in spite of the sadness inherent in the story of a language and a people whose days are numbered, even if they don’t know it yet. “To be bringing a world of Jewish arts and letters and Jewish artists into focus, and bringing that world to life, is a really celebratory mood,” she said.

Wright heard about Indecent when it was being performed on Broadway, but it wasn’t until The Arden approached her about a year ago that the prospect of directing it came to mind. For Wright, a chance to highlight Yiddish language and culture was one she couldn’t miss.

“There’s a level on which the play is a really a story about Yiddish,” she said, “and celebration of that language. And part of the tragedy of this play is the cultural erasure that happens when a language is lost.” And yet, she said, to be reminded of her grandmother’s Yiddish could never have been a wholly tragic occurrence.

Michaela Schuchman plays Chana, among other characters; nearly the entire cast plays multiple roles. Her first interaction with Indecent was more direct than that of Wright’s. Knowing that a taping was airing on PBS, she gathered her whole family to watch with her.

“I had this immediate reaction of, ‘Oh, I need to tell this story, I need to be a part of this piece. This piece is about me and about my family and my ancestors,’” she said.

That was about a year and a half ago, and she’d been looking to be a part of a production since then. Now, she’s learning the Yiddish that her grandmother knows.

“It’s been really wonderful to be able to explore that part of my identity,” she said.

There remains, for Schuchman, a certain pressure in taking on a role in a play so integral to her own understanding of the twin forces of her identity, namely, being Jewish and being an actress, as her character is.

“I want to feel like if my grandmother and her parents and their parents came to see this show, they would see somewhere in the piece a little part of their lived experience,” she said.

Leah Walton, who plays Halina and many more, also feels the play “come alive” for her at the intersection of theater and Judaism. Like Schuchman, she feels the play’s closeness to her family’s history. To speak Yiddish, and especially, to sing in Yiddish, “feels so good,” she said. She would love for audiences to come away from a performance with “a curiosity to learn more about the beauty and joy and passion that is in Yiddish theatre and Jewish culture.”

Ultimately, the performers in God of Vengeance largely find themselves in unhappy endings, but for Wright, that doesn’t detract from the play’s true spirit.

“The enduring thing in this story is the story of people coming together to build something together,” she said. “In some ways, that’s the only answer to the dark and terrible forces in the world.” Especially when so much of the world is suited toward the opposite, she added. 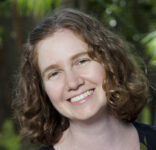