Sam Fuld earned the nickname Super Sam by throwing his body into the outfield walls of every Major League Baseball stadium and staining his jersey with the outfield grass of all four teams he played for — that’ll happen when you make as many diving catches as he did.

Today, as the major league player information coordinator of the Philadelphia Phillies, he’s looking to go super in a different department: analytics.

“I really do enjoy the unique challenges of working in the front office and all the intellectual stimulation that provides,” he said.

Fuld, who is Jewish, features prominently in Heading Home as a veteran outfielder who had been an ESPN fixture for years due to his proclivity for standout defensive plays.

Now 37, the New Hampshire native and Stanford University graduate is marrying his love of statistics and baseball together, essentially acting as a translator between the Phillies’ research and development department and the active roster. Many baseball insiders speak analytics, and many are fluent in player-speak as well. Rare is the person who can converse in both.

After his playing career came to a close during the 2017 season — Fuld found that he could not quite get his shoulder back to Major League-ready after a major surgery — he began to look around for jobs in baseball. People who work in baseball find themselves traveling constantly and working maniacal hours, something that Fuld took into account when he discussed his future with his family; it helped, he said, to have “an incredibly understanding, supportive, empathetic wife.” By November of that year, the Phillies were announcing his contract.

Fuld’s interest in baseball analytics was buoyed by Moneyball, Michael Lewis’ account of the then-radical measures undertaken by the Oakland A’s in both game play and roster construction, but he’d long been interested in the way numbers could make a team better. Now, working with one of the largest analytics departments in baseball, he’ll have a chance to do so on a grand scale. 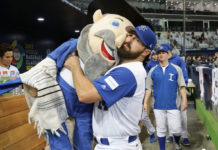 ‘Heading Home’ Scores in More Ways Than One